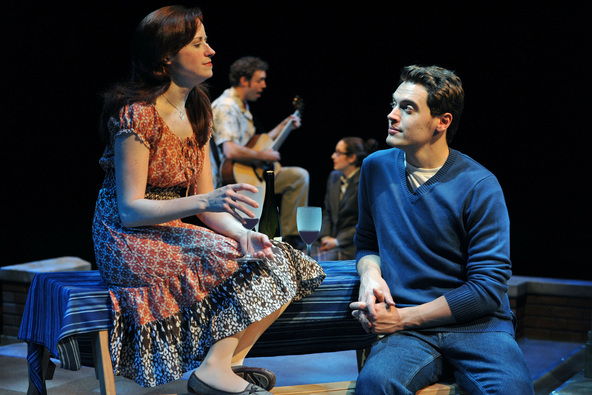 Image courtesy of Hero: A New Musical in Chicago
January 15, 2015 – Following a successful run at Seattle's 5th Avenue Theatre, J. Augustine Truffle's original production of White People Problems: the Musical will premiere on Broadway at the Winter Garden theater in April, producers announced Thursday. The show, which drew significant praise from the vast majority of Seattle residents, will join the pantheon of theatrical productions celebrating the profound struggles of upper-middle class American life.

White People Problems tells the tale of a Kentucky family torn apart by years of not expressing their deepest inner thoughts to anyone besides the audience, and a traveling salesman who everybody likes, until the handsome mayor and his beautiful fiancee have a falling out, and the salesman threatens to steal her away to the next town 15 miles away.

“WPP is a passion project twelve years in the making,” Truffle told Playbill Magazine. “It is a story born of personal experience, as well as the collective reminiscings of several of my Long Island friends. In fact, the pill-addicted former debutante trying to start a new record label by selling her antique spoon collection is loosely based on my mother.”

The book went through several changes throughout the move from off-Broadway to Seattle and now back to Broadway. The shanty town where Beatrice was raised has been changed to a quaint but troubled seaside community in Portland. Trevor's heroin addiction, which led to him contracting AIDS, has become an occasional smoking habit which causes a heart-rending perpetual cough. And the family maid has been renamed Onida, as well as having all other character details removed.

“I expect that the typical Broadway patron will get a huge kick out of this production,” Truffle continued. “It harks back to a mystical time when alcoholism, bad investments, and parental neglect seemed like the only real problems in the world. Other playwrights may disagree, but I've always felt that the most fascinating of human struggles are those inflicted on oneself.”

John Lithgow stars as Elwin, the DuFrayne family patriarch who can't escape the memory of his first love, a blue Mercedes taken by debt collectors. Laura Benanti stars as Rachelle, the housewife who is bored with the man she decided to marry, and finds a sudden attraction to town newcomer Cliff. Colin Donnell stars as Cliff, a world-traveling game hunter who is struggling with his sexuality in the 21st century, and finds a sudden attraction to Elwin.

With previews scheduled to start late in March, White People Problems will appear alongside another exciting new musical production, White People Save the Day: A Civil Rights Saga.