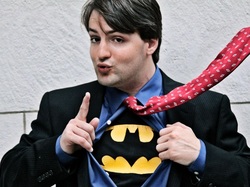 Little is known about Mikael Page, or his dark history. He was born and raised on the frozen hills of Upstate New York by a pair of wolves, both of whom were lapsed reform Jews and staunch Objectivists. Also same-sex wolves. Though he grew up in the suburbs, he was bused daily to the inner city to attend the School of Hard Knocks, a charter school focusing on thuganomics and women's studies. He quickly learned what it takes to survive on the streets: a dry wit and a handful of dodgy investment options. Following graduation, and a brief stint with the mob, Page washed up in Moonmont, where he landed a job as the suburb's oldest paper boy. His bold leadership caused the paper boys to unionize, which  led to the swift dissolution of the Moonmont print journalism industry, so now all their news is on the internet. To fill the void, Page stepped up as editor-in-chief of The Moonmont Chronicle, agreeing to work pro bono for the first few years. To this day, he receives no salary, forced to survive on his millions of dollars in residuals after inventing the Super Soaker Oozinator.

Little is known about the quaint suburb of Moonmont, located in the center of residential West Harlem, or its dark history. Town legend suggests that it was founded by Finnish explorer Juan Feivel Moonmont, who had his galleon catch fire in the Hudson, his life raft attacked by an escaped show dolphin, his remaining crew mutiny after swimming ashore, his survival rations swindled by natives due to a serious gambling problem, all before planting his flag on a hillside, and proceeding to drop dead from syphilis. Hence the common village phrase for a series of misfortunes, "pulling a Juan Feivel." The town hall was erected at the site of Moonmont's flag, which was converted into a Caffe Bene five years later.

Notable events: First recorded Thanksgiving meal to feature pumpkin pie and passive-aggressive remarks about cousin's new job (1635); Public wig burning to protest the election of President John Adams (1796); Most recent public witch trials on record, still in appeal (1871); Original site of the Lincoln Memorial (1921), relocated to National Mall due to indecent graffiti (1922); Largest pro-Vietnam War gathering in the country, with performances by Dave Dudley and The Spokesmen (1972); Filming of the majority of scenes for The Imaginarium of Doctor Parnassus (2008).