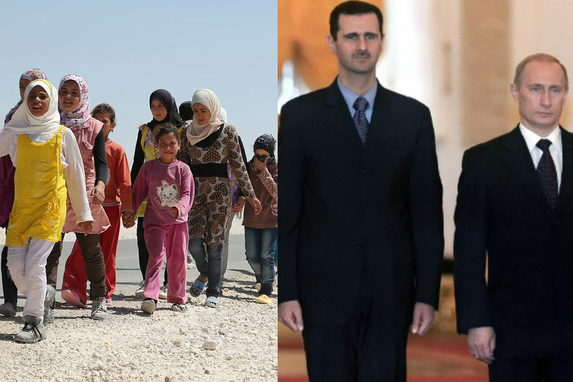 Photos courtesy of Milwaukee Jewish Federation and Sergey Chirikov
November 17, 2015 – Following the devastating attacks on Paris Friday night, Muslim refugees from war-torn Syria have come under increased scrutiny by Western nations. While many countries, including the United States, still intend to open their doors to families seeking refuge, many fearful citizens and politicians have warned that doing so could pave the way to remembering that shit is still going down in Syria.

“I have no intention of welcoming potential bummers into my state,” said Louisiana governor Bobby Jindal. “I'm all for human compassion, but if we just start allowing anyone from a continually besieged nation onto our soil, pretty soon we'll be forced to learn about the misery and complexity of international disputes. I consider it my job to protect Americans from those realities.”

Most Western nations are still welcoming refugees, and the United States intends to take in around 10,000 refugees over the next year. But while most of those displaced carry with them only children and a desire to work, fears grow that a handful of extroverts, bearing insider perspectives of a civil war that's been raging for four years and has cost the lives of hundreds of thousands at the hands of a brutal despot whose only hope for retaining power is to fan paranoia of an ISIS takeover, might slip through the cracks.

“I've done a pretty good job of sheltering my child from news of geopolitical strife up to this point,” said Arizona woman Betsy Grimoire. “I know things are bad in Syria, but I have no desire to learn exactly how bad, and if I can pass that same ignorance on to my son by keeping Syrian children out of his school, then I'll have done my job as a mother.

“I am very proud that our governor is fighting Obama on this,” she continued. “Next thing you know, we'll be inviting immigrants from Lebanon or Kenya, and then we'd have to start reporting on their national tragedies as well!”

When asked if Putin's intervention in Syria on behalf of President Assad in spite of admonishment from the UN reflected a potential second Cold War scenario, most Americans covered their ears, shut their eyes and repeatedly sang “la la la la la.”