Watergate Hotel Files Copyright on All Scandals Ending in  -Gate 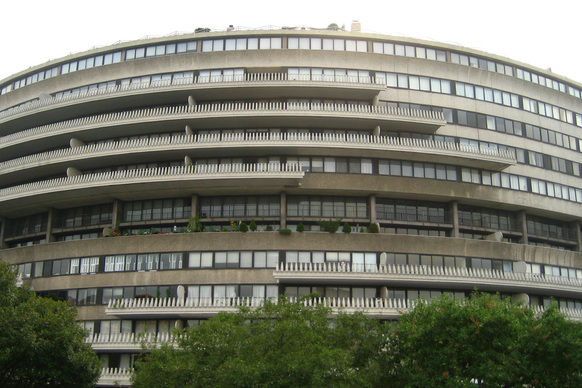 January 30, 2015 – Euro Watergate Hotel, the holding company currently claiming ownership of the historic Watergate complex, have officially filed a copyright, the terms of which grant them sole ownership of not just the name “Watergate” and its related scandal, but of all scandals ending with the suffix -gate invented by the media between 1972 and today.

“When we purchased the storied hotel in 2010, our intention was to buy a landmark,” explained Euro Capital principal Jacques Cohen. “If we hadn't planned on benefiting from the name, we wouldn't have bought the decrepit old thing. And were it not for the famous Nixon scandal, there would be no Gamergate or Deflategate. The media must come to terms with that.”

In regards to those terms, while the Watergate scandal itself remains free to use as a genuine historical event, media companies and individuals are financially liable for their reference to lesser, stupider scandals using the now trademarked -gate suffix, presently and retroactively all the way back to the Koreagate scandal of 1976.

“Nixon's Watergate was a scandal of unquestioned political import,” Cohen went on, “whereas the scandals that have followed, including Monicagate, Rathergate, and the amusingly named Weinergate, are little more than entertaining distractions promoted by uncreative corporate entities. It only seems reasonable, should journalists and bloggers wish to continue with this trend, that every mention of Deflategate costs $5000 apiece.”

Indeed, several media companies have already been fined hundreds of thousands of dollars for their decades of lazily named scandal reporting; everything from Hackgate to Nipplegate, as well as all three Troopergates, and the especially lazily named Gategate.

While a number of the affected companies have filed a joint appeal to keep the rights to -gate open, reporters are scrambling to come up with a new suffix which captures the essence of a monumental breach of trust. Among the most favored options is -blagojevich.

Editor's Note: We at The Moonmont Chronicle are heavily in support of the case to appeal the copyright. As it stands now, excluding past articles, this article alone would cost our company $55,000.