Viewers Sick of Waiting for Queen Elizabeth to Invade Spain 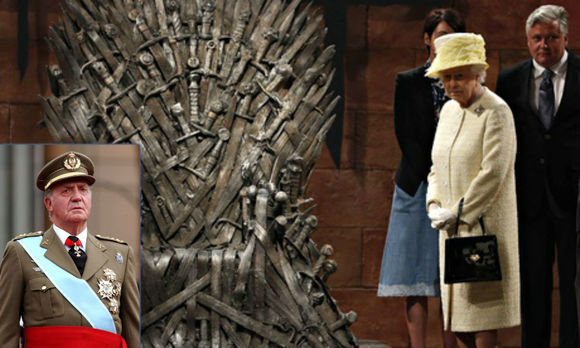 Inset by Carlos Alvarez; Photo by Phil Noble
June 29, 2014 - Long-time viewers and devoted fans of Britain's royal family now confess, at the tail end of another spring season, that they are annoyed that Queen Elizabeth II has not yet invaded Spain, even though she has been saying she would for years.

Elizabeth's accession in 1952 met with mediocre ratings and mixed reviews from subjects, but the monarch's popularity grew quickly as she proved herself a strong leader in her own right, and rallied the people around a singular vision: to see her crush the mainland kingdoms which had spurned her family in decades past, particularly the House España, led by the hapless King Juan Carlos I.

“That rallying cry against Spain really kept viewers invested in the British monarchy, way longer than it seemed to make sense,” said one longtime fan. “But instead of what we were promised, we've gotten a lot of bureaucracy and fluff, like the royal wedding and the stupid fucking Jubilee.”

Indeed, Queen Elizabeth, referred to by subjects and avid fans as 'The Queen Mother,' seems to have been tied up by internal affairs since her marriage to her formerly barbaric but now widely beloved husband Prince Philip, of The House of Schleswig-Holstein-Sonderburg-Glücksburg.

Meanwhile, on the mainland, high-octane drama swept the kingdoms as just this past season, King Juan Carlos peacefully abdicated the Spanish throne to his son, Felipe VI. Referred to commonly as 'The Boy King,' Felipe is the youngest monarch in all of Europe, causing skepticism amongst his subjects, and guaranteeing a series of twisted plots by his peers to exploit the crown's vast power.

“It's all very interesting on the mainland,” said another defeated viewer. “Abdications, sex scandals in House France, and an eerily familiar continent-wide shift towards conservatism. It's fun to watch, sure, but the Queen seems totally separate from all of it, and because she's such a favorite, that is a real bummer.

“We can only hope she'll do what she set out to in the coming season, and set sail for Spain with an army in one hand and righteous fury in the other.”

Weary British royal fans confess that while the unfolding events in Europe still very much hold their attention, they miss all the overseas news about America's meth wars.