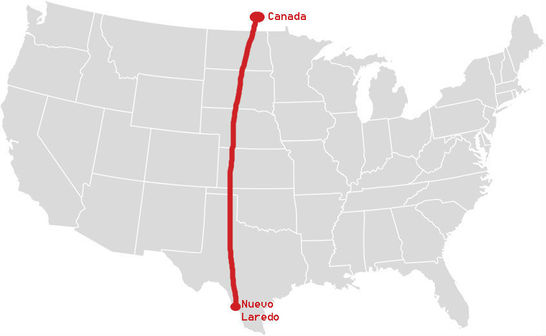 July 24, 2014 – Calling it the greatest public works projects of the 21st century, the U.S. High Speed Rail Association, in conjunction with the federal government, announced that they have put the finishing touches on the ambitious high-speed rail system that connects the border of Mexico to Canada, with no stops in between.

“Today is a day to celebrate America's progress towards the transportation future,” USHSR President Andy Kunz told his team triumphantly at the wrap party. “While there's still much to be done in the way of high-speed railways for this nation, we should be proud of how quickly and effectively we've built this one which, for whatever reason, the federal government was so desperate to have.

“Today, thanks to you, Americans live in a world of plummeting oil costs, lowered carbon emissions, and the ability to travel from the southern end of the country at Nuevo Laredo to visit our neighbors to the north, for whatever reason.”

The unprecedented technology of this railway moves trains north at 225 miles per hour, constituting a five-hour journey complete with amenities such as roomy seating, dinner and bar cars, and meeting spaces, before dropping off passengers who, for whatever reason, chose or were asked to take the nonstop journey up past the states of the United States to Canada.

“It wasn't our first instinct as a fiscally responsible Congress to accept the proposals of the USHSR,” said Congressman Bill Shuster, majority chairman of the House Committee on Transportation and Infrastructure. “But once we heard what they were capable of, in regards to states like Texas, New Mexico and Arizona, we knew it was the right step for America. No cost is too great to address the, um, traffic congestion crisis in those southwestern states.”

In line with the congressman's statement, he says they plan to support continued construction which link stations in San Diego, Tucson and Las Cruces to the existing track somewhere around Wichita, for added convenience.

“Our long-term intention is to provide similar railways along viable commercial routes, such as between Los Angeles and Las Vegas, or New York and Chicago,” Kunz explained. “But we're just so amped by the enthusiasm of Congress for this particular project, we're prepared to focus on it for the next decade at least. How great would it be if, from any of America's border towns, you could hop on a cheap, comfortable high speed train which takes you, for whatever reason, to wherever it is in Canada this drops you off?”

“I think it's Manitoba?” he pondered. “Bring a French guidebook just in case.”