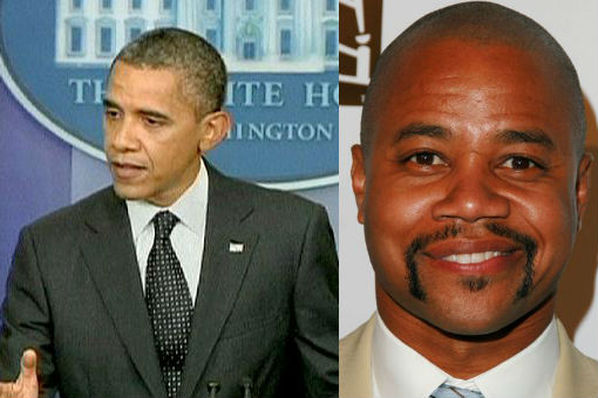 December 17, 2014 – After over a decade of what could generously be described as frosty diplomatic relations, President Obama has announced that 2015 will be the year that America “cuts loose the shackles of the past,” and re-establishes ties with 46-year-old actor Cuba Gooding Jr., best known for Jerry Maguire as well as the international Radio disaster.

“We can no longer allow the prejudices of our nation's past, however valid, to dictate the present attitude towards this accomplished Hollywood performer,” the President announced on Wednesday. “It is important to remember that Cuba is an actor like any other; he has his flawed projects, yes, but we mustn't forget his contributions to Boyz n the Hood and As Good as It Gets. We can return to those days together.”

Relations between Mr. Gooding and the United States first turned sour with the 2002 release of Boat Trip, a misstep for which also caused US interests to pull out of Horatio Sanz. Strict box office embargoes followed, all of which would seem archaic were it not for a continued string of mediocre supporting roles and grossout comedy quagmires.

“I, for one, cannot wait to see what Cuba will achieve with the full support of the American media landscape behind him,” Obama continued. “It will take time to heal, but I believe another Rod Tidwell-type role is just around the corner, which is exactly what we all need in these dark times.

“Let me be the first to say, 'Show me the money!'” Obama concluded, though he repeated the phrase several times with a self-amused grin, while his nearby daughters rolled their eyes.

Despite national sentiment in favor of giving Cuba Gooding another shot, opponents of the Obama administration and of Cuba's career decisions are none too pleased. Delivering his own address, Florida Senator Marco Rubio, himself a former Cuba fan and one-time aspiring actor, had harsh words for the President.

“While Cuba's movies may have shaped me as a young adult, I do not feel that I owe him any sympathy for his blunders, and neither do the American people,” said Rubio. “If we allow this President and this washed-up hack to dictate our nation's cinematic tastes, before you know it, there'll be another Snow Dogs on our hands! Can America really afford to suffer through another Snow Dogs?”

When informed that with trade re-established, Cuba is now in pre-production to play OJ Simpson in an FX drama series, Rubio responded, “OK, that does sound pretty sick. I'm down.”