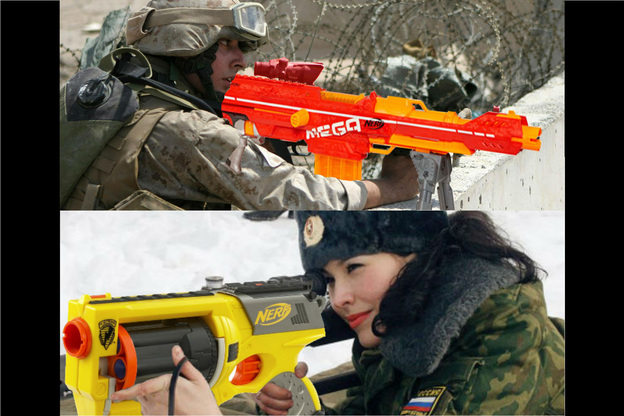 October 30, 2014 – Confessing that the geopolitical strife across the globe is only adding to the tension that is already wearing them down, leaders of both the United States and Russia announced somberly on Thursday that the two nations are declaring open Nerf warfare, in order to vent some of the pent-up frustrations of their respective armed forces.

“It is my solemn duty as Commander-in-Chief to report that negotiations have failed,” President Obama said at an emergency press conference. “Russian and American interests are still very much in conflict in both Western Europe and the Middle East, and we can find no alternative to acting on these hostile urges other than full-on warfare. Therefore it was decided that both armies would be equipped with plastic dart-shooters and Koosh Ball grenades, in order to minimalize casualties when we go to town on each other at the Ukranian border.”

As suggested, the announcement comes on the heels of failure to resolve any of the nations' many diplomatic disputes. The countries remain at odds on U.S. engagement in Iraq and Syria, Russia still grants residency to Edward Snowden and stretches their western border, and both nations continue to sell actual firearms abroad without restraint. As such, it was decided that combat engagement with suction-tipped armaments was the most appropriate way to convey their restlessness, so that no one important actually gets hurt.

“Russia has been preparing for this contingency for some time,” President Putin announced confidently to his people. “We have been stockpiling darts at key areas since the 80s, and we have released design plans for massive cushion forts to our top engineers. And if all else fails, we're prepared to fly tactical Nerf nukes over major cities, which fire 80 darts in all directions. Man, those things are awesome.”

“The Russians will be expecting a ground assault with N-Strike Mavericks and Mega Blasters, which is what we're counting on,” Obama said in hushed tones at the secret underground padded war room. “In fact, we've managed to equip our drones to fire surgical Mega Missiles at high-value targets. Rest assured, we will win this conflict, and Russia will have to sign a non-binding agreement to stop being such a jerk.” 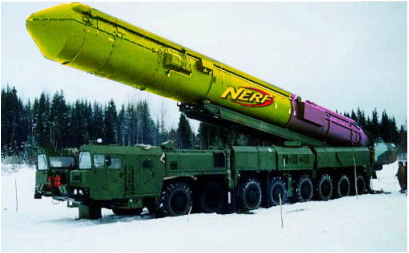 Image courtesy of Jolly Jack
“The Americans think our technology has not advanced since the Cold War, which is what we are counting on,” Putin told assembled reporters while riding shirtless on a horse and brandishing a Nerf Crossbow. “We have come a long way since the Nerf Bow & Arrow. This war shall prove Russian military dominance once and for all.

“Just remember guys,” he cautioned his troops, “don't aim for the eyes. That's a sure way to start an actual fistfight, and then it won't be fun anymore.”

With cushiony hostilities soon to be underway, China has requested that they be allowed to participate, prompting an agreement that they could take winner, so long as they clean up before everybody's mom gets home.