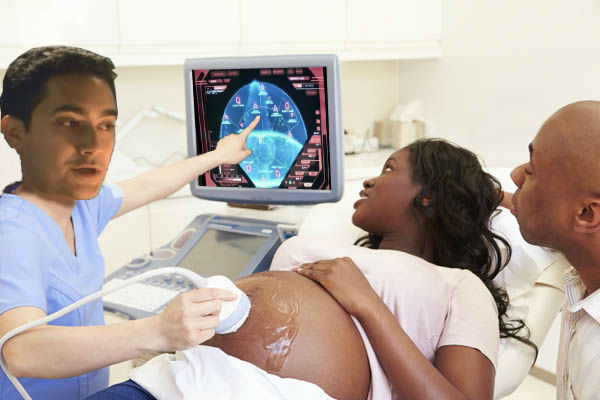 March 12, 2015 – A prenatal ultrasound test performed on Louisville's Jamilla Warner early Thursday showed all the signs of a healthy, five-month-old fetus, as well as a small squadron of Cylon raiders on swift approach to the Battlestar from a nearby nebula.

“As you can see, the baby's heartbeat is steady, and the Cylon vessels appear to be flanking off to engage with the civilian fleet,” Lieutenant ultrasound technician Felix Gaeta told the Warners. “I recommend plenty of fiber and vitamin A, as well as scrambling a small response team of vipers to engage the enemy.”

Jamilla and Travis Warner, married six years, had a similar experience with Jamilla's first pregnancy, when the sonic imaging device, or DRADIS, showed a healthy baby girl resting comfortably in the womb, along with a tylium-rich planet orbited by a deactivated basestar.

“While the Cylon bogies pose a limited threat to the colonists or to your unborn child, they may just be scouts, which would mean a full raiding party is not far behind,” reported nurse Gaeta. “We should prep the fleet for lightspeed jump, as well as schedule another appointment for April.

“You needn't worry about any health risks, or twins for that matter,” he continued, “but that doesn't mean we can become complacent, as humanity stands on the brink of annihilation at the hands of these toasters. In any case, congratties!”

When asked what they should expect from their next appointment in April, Gaeta said the president wished to send Starbuck on an undercover mission to retrieve the Arrow of Apollo, but that Commander Adama forbade it under threat of martial law. Either way, their insurance would cover it.