Trump to Supporters: “I Only Watch the First Six Seconds of YouTube Videos Because I Refuse to Be Rick Rolled” 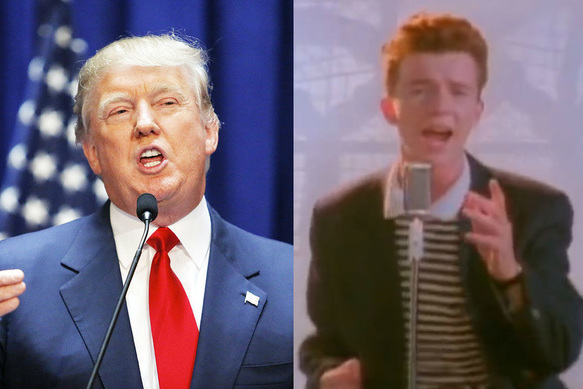 March 15, 2016 – After insinuating that a rally protestor was a supporter of ISIS based on a doctored YouTube video, Republican frontrunner Donald Trump defended himself be saying he “only knows what's on the internet.” When asked to elaborate on Tuesday morning, Trump clarified that he only watches a few seconds of the videos he cites at rallies and debates because they provide adequate information at the top, and also due to a longstanding fear of being exposed to “Never Gonna Give You Up” by Rick Astley, commonly known as 'rick rolling.'

“It happened to me the first time about six years ago,” Trump told reporters on his way to a rally in Palm Beach, Florida. “Someone I believed was a friend sent me a link to a video he said I had to watch, it said it had breaking news at the beginning. Next thing you know, this weird little ginger fella in an oversized coat is singing that he's never gonna let me down. Well I was feeling pretty let down at that moment, I'll tell ya.”

So traumatized was Trump by the experience of being rick rolled, that in a personal transformation which might explain some of his limited information ideas and outsider mentality, he refused to ever watch a video in its entirety again; not just on YouTube, but on all media sites, including mainstream news outlets, as Trump believes they are all so corrupt as to have the potential to foist Astley's oddly deep voice upon him.

“I don't even click on email links anymore, don't need 'em,” Trump said at his rally to raucous cheers. “My brother Robert sends me a link that says 'Proof That All Syrian Refugees Are Terrorists,' I believe him. The headline says it all. I don't need to click on it to learn more, Rob might be messin' with me. He and Astley might be playing a trick on yours truly.

“If I become president, I promise you, we'll make new laws so you can sue anyone who rick rolls you against your will, and we'll all make a lot of money,” Trump concluded, causing the crowd to go wild.

When asked after the rally if he'd ever watched the music video in its entirety, Trump said he had, the first time he was exposed to it. In fact, he found it so catchy he couldn't close the webpage until it was over.

“I actually really enjoyed it, even though I just said the opposite thing up there onstage,” Trump told reporters. “I just can't stand people trying to make me feel stupid. It's disrespectful and mean-spirited, and the only people who'd play that kind of practical joke are probably ugly losers anyway.

“I really just feel bad for the other people in the video,” he went on. “They're doing a great job. The women are hot, that's important. And I particularly like the black guy behind the bar with the suspenders. He does a great job. I have a great relationship with the blacks.”

When Robert Trump was pressed to provide information on his email claiming 'Proof That All Syrian Refugees Are Terrorists,' he said that more details could be found here.