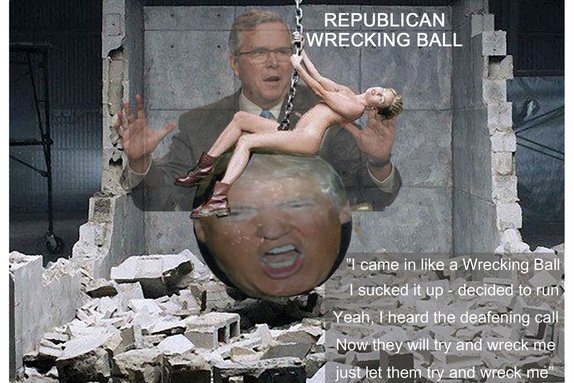 
September 10, 2015 - The Trump campaign released a new ad today using modified video images and lyrics from the 2013 Miley Cyrus hit “Wrecking Ball,” building on Trump’s status as a Washington outsider and a purportedly strong visionary capitalist, as well as his no-holds-barred approach to a much-needed change in governance.

Trump himself touted the ad as an appropriate, symbolic representation of his intent to clean out the cesspool of entrenched political hacks in Washington, by taking a wrecking ball to the institutional detritus that has “led our great country down the crapper for the last three decades.”

When asked why he chose to depict himself as a wrecking ball swinging below a naked 23-year-old avowed bisexual, Trump replied, “It grabs your attention, am I right? I mean, I’m certainly not going to have some 60-year-old dog-slob sitting on my head, and she isn’t dating any of my kids - Ivanka, Eric, Tiffany, Don Jr., or little Barron I think - so what do I care?”

Reached for comment, Miley Cyrus said, “I literally puked my guts out when I saw the f***ing ad for the first time! What a f***ing creepy and arrogant a**hole! My lawyers are almost sh***ing themselves at the prospect of litigating this f***ing political pervert into another bankruptcy!”

Trump’s response: “Join the crowd you freaky little imp, I will bury you along with the Republican establishment and all of your crazy left-wing blowhard friends.”

No word yet from the Republican field, the Democrats, or music aficionados. Most seem to view this as just another day in our new millennial politics.