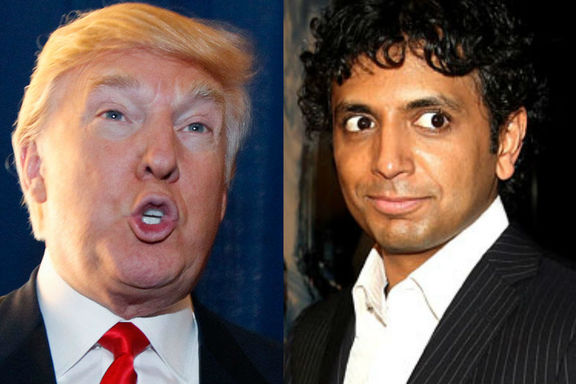 October 27, 2015 – New details brought to light about the campaign to elect Donald Trump for president, a campaign largely defined by gaffes, bigotry and childishness, have revealed that its very existence is an elaborate twist put in place by the acclaimed director of The Sixth Sense and The Last Airbender, M. Night Shyamalan.

The Trump campaign, labeled an artistic installment by the Indian-American filmmaker, was written as an exploration of America's incredible willingness to elevate a non-politician and egomaniac to the highest office in the country. It was Shyamalan's contention that the Trump character would serve as a reflection of the modern American asshole that many voters would find fatally appealing.

“It's a classic allegory of the unrestrained id,” Shyamalan told Access Hollywood on Monday. “A majority of the country pines for a world where they can say whatever they want, date whoever they want, and get a million dollars from Daddy to start a career. When they can't have that, they celebrate the man who already does.

“But it's all an illusion, you see,” he continued, “and a particularly well-crafted one at that. I dare say, this may be my biggest hit since Signs, and without needing the ludicrous religious overtones.”

The project is financed by Blinding Edge Pictures, and while the budget has remained a secret, insiders estimate the cost at near Avatar levels. The studio has also remained mum as to who has been playing the titular role, though the Hollywood press confirms that they have not seen Daniel Day-Lewis since June.

“The President Trump installment has proved a captivating success, both in terms of spectacle and in terms of sabotaging the national dialogue,” says political analyst and thriller enthusiast Durvane Sklootsmythe. “And yet, one must wonder if, rather than re-launching M. Night's career, this experiment will have the net effect of causing the very fabric of our country to crumble under the weight of its own bombast and misguided ethnocentrism.”

Despite such projections, Sklootsmythe and other political experts agree, the worst possible outcome could not possibly be worse than The Happening.