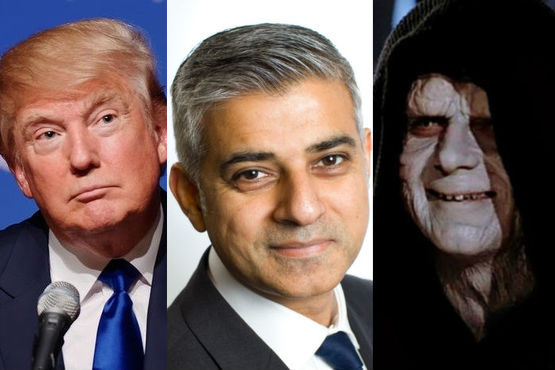 May 10, 2016 – Following Sadiq Khan's inauguration as mayor of London, England, presumptive nominee Donald Trump surprised many supporters by stating that Khan would prove an exception to his ban on Muslims entering the United States under his presidency. When pressed about this change of heart, Trump stated that he had recently learned of Khan's previous job title, 'Shadow Lord Chancellor,' which, to quote Trump, sounds “totally badass.”

“I take my travel ban policy very seriously,” Trump told the crowd at a rally in Seattle. “But come one, I'm not gonna mess with a guy who was called Shadow Lord Chancellor until just a few months ago. If anything, I wanna be best friends with that guy. How awesome would it be to have a Shadow Lord as running mate? Maybe Rick Perry can step his game up.”

Later at a sit-down interview with ABC, George Stephanopoulos attempted to clarify for Mr. Trump that the role of the Shadow Lord Chancellor is simply to “shadow” the Lord Chancellor of Great Britain and provide accountability and alternative views for the efficient functioning of the courts, but Trump covered his ears and refused to listen.

“Don't tell me what it is, I don't want to know!” he exclaimed. “I've already said I like the guy, even though he's cozy with America's enemies. I think my supporters will understand if they also assume he's some kind, like, of retired Sith lord or something. Oh man, I wonder if he has a lightsaber?”

While Khan has criticized Trump in the wake of his remarks and said he does not wish to be placed on any sort of petty exemption list, he did admit to reporters that he used to have a bit of fun with his title.

“Sometimes during Ramadan, I would wake my daughters up by walking into their room wearing a black robe and saying, 'The Shadow Lord hungers.' Nobody else thought it was very funny, but I sure got a kick out of it.

“Mr. Trump and I don't see eye-to-eye on many things, but at least we can agree on the merits of totally sweet-sounding government titles. I can only assume that, if he is elected president, he will quickly convert the title to 'Shadow Lord Chancellor of America,' at which point I will be happy to visit and share some of my dark wisdom.”

While Trump continued to express great interest in meeting the ex-Chancellor turned mayor, he said he was far more excited to get to know his successor as Shadow Lord Chancellor, The Lord Falconer of Thoroton. “That's a real guy! Are you kidding me? England is a ridiculous place.”