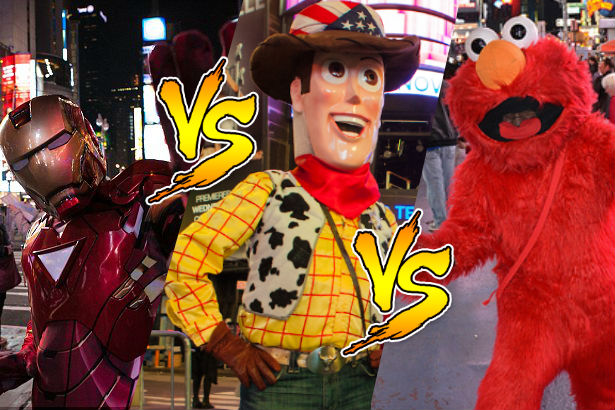 October 22, 2014 – The tension in the underground world of organized mascoting hit a potential boiling point Wednesday, when Sesame Street agents Elmo and Cookie Monster effectively assumed control of the corner of 44th & Broadway, in front of Toys R Us, away from the Avengers. Anonymous sources from inside both organizations suggest that by Friday, the battle for frolicking and begging turf in Times Square may escalate into all-out war.

“You always see them gathering now, whispering to each other,” said one frequent midtown visitor, motioning to a circle of mascots which included one Iron Man, two Hulks, and Predator. “What could they be talking about other than organizing against the other mascots?”

While it is difficult to pinpoint when tensions took root, one can speculate that following the acquisition of Marvel by Disney, more characters began to appear in Times Square, leading to increased disputes about respective begging turf. Groups began to form based on denomination, or cartoon ethnicity, to address the growing quarrels, but not all mascots are happy with the new arrangements, including one Cookie Monster who was so frustrated, he threw a child to the ground at the mere sight of Puss in Boots.

“Beyond simply being more popular with the kids, we are also agents of justice and righteousness,” one Iron Man, standing alongside Iron Patriot and Catwoman, insisted proudly to reporters. “Those Sesame Street Monsters would like nothing more than to see everything burn.”

As of now, the superheroes stand poised to defend the territory they've managed to claim since 2008, while wandering bands of Monsters, or the politically correct term Muppets, have started terrorizing the mascot community, culminating with the incident of a Spider-Man getting curb-stomped in front of the Jamba Juice on 47th. Meanwhile, the Pixar/Dreamworks authority have done their absolute best to keep the peace.

“Buzz and I see no reason that these sides can't come together,” Woody said at a press conference, in a perfect, unbroken southern accent. “We all want the same things: to surround small children, to insist on pictures with full-breasted Swedish tourists, and to harass unwitting parents for tips. We've made decent progress with the heads of both families, but first we must focus on rebuilding public trust, ever since Shrek went off on that rant about Orientals.”