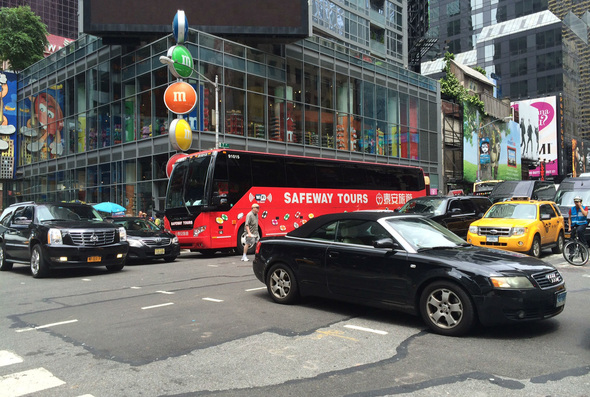 Photo by Mikael Page
July 18, 2014 - With so little time to explore, tourists visiting the city often struggle with what sights to see first. Thankfully, there is a new line provided by the Safeway Tours company that is quintessentially New York: a guide to midtown's infamous immovable traffic.

“We thought hard about what people most wanted to see,” said Larry Bingham, CEO of Safeway Tours, a company that primarily shuttles people between Ontario and New York, therefore no stranger to traffic. “What we realized is, with all the cars and taxis and trucks and rickshaws in Times Square, what people clearly want is a giant clusterfuck. We decided to provide the most informative and convenient means of seeing and photographing New York's historic 24-hour standstills.”

The tour extends from Houston Street to the Beacon, but if you just want to catch the main action at the center, Safeway recommends hopping on around Madison Square Garden as the tour approaches the theater district. Guides say to just hop on anytime, as the bus will most likely be immobile.

“The tour has been a big hit so far, especially with people who enjoy the thrills of stopping to stare at stuff and incessant honking,” said Bingham. “In a way, with our volume in such a concentrated area, we like to think that we're contributing to the exhilaration of spending hours in one place.”

If the tour maintains its popularity, Safeway says they intend to buy a second bus to follow every tour that will always miss the light and plant itself at the center of the intersection, so tourists on the first bus can turn around and take pictures.