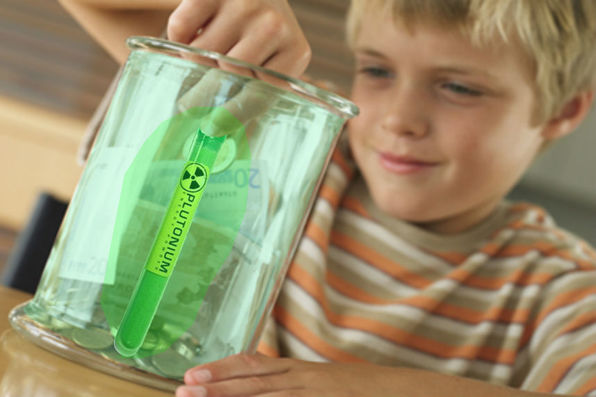 Photo courtesy of PBS.org
September 16, 2015 – Martin Alabaster, a student in San Antonio, was excited today to show his third grade teacher and classmates how he'd successfully transformed his home bathtub into a low-level nuclear reactor and used it to create the explosive element plutonium. When he saw the news this morning of a Muslim boy's arrest in Irving for making a simple clock, he was immediately thankful to be completely and recognizably white.

“After reflecting on Ahmed's predicament, I could see how bringing a vial of volatile materials might be construed as dangerous, perhaps even more so than a homemade clock,” Alabaster told the press. “Luckily, due to my indisputable whiteness, I felt no need to abandon the show-and-tell item for something safer. I knew my teacher would understand.”

Not only did Martin's teacher understand, she said the plutonium was the most impressive show-and-tell feature of the day, if not the entire school year. She and the principal agreed, Alabaster shows great promise in the field of chemistry, and may even need to be moved a year ahead of the less ambitious or pale-hued students.

“I couldn't believe that innovative little Marty had managed to use his porcelain bath to bombard uranium fuel rods with neutrons in order to create a highly radioactive substance,” gushed his teacher Mrs. Seaborg. “The other students just brought in stupid shit like brownies or pictures of their dog. One other student, Amira Hussain, did create an impressive perpetual motion device, but I felt the need to put her in a headlock until a SWAT team confirmed it was safe.”

Several scientific companies, as well as the munitions brand of the U.S. Military, have already reached out to Alabaster's family to offer him future scholarships, if he might consider providing them with plutonium under the table. In a single morning, Martin has potentially gone from elementary school student to a legitimate businessman of the weapons-grade chemical trade.

“As tempting as all these offers are, I think it's important for me to stay in school, especially considering what a supportive environment it's been,” said Alabaster. “But it is good to know that due to my passion for science, as well as my Caucasian cred, there will be no shortage of opportunities for me anywhere in this country.”

As of the release of this story, a Korean middle school student in Birmingham who made a trebuchet in wood shop is still wondering where he stands in all this.