Ted Cruz to New Hampshire: “Vote for Me or I Will Kiss Your Baby” 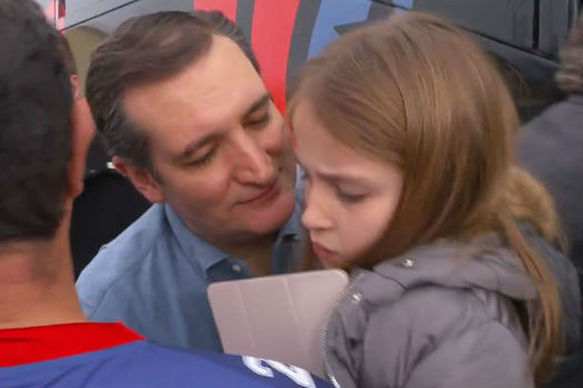 February 2, 2016 – Monday night saw Senator Ted Cruz win the Iowa caucus against a large crop of similarly likeable Republican opponents. With the New Hampshire primary set to take place next Tuesday, the currently leading candidate is making a promise to all conservative voters in the state, that should they forsake him, he will personally show up to their house and kiss their baby.

“I may be a politician in the eyes of the electorate,” Cruz announced at a rally, “but more than that, I am a man who keeps his promises, and who will do what it takes to win this election and steer the country back towards freedom. To that end, I vow to arrive at the doorstep of every individual Trump or Rubio voter, and forcibly smooch their newborn children. Even if it takes until the South Carolina caucus!”

The kissing campaign threat, which even supporters of Cruz confess is truly horrifying, has already been tested in Iowa on a few unlucky infants as an intimidation tactic. To show he means business, Cruz even strong-armed a peck on the cheek out of his unwilling daughter at a campaign stop, an experience from which she has not yet fully recovered.

“If I had to describe the sensation in relatable terms,” Caroline Cruz, 7, explained, “I think it's most similar to the feeling you get when an airplane takes off slightly sideways, combined with being told your cat has died. I imagine it's also akin to what encountering a dementor from Harry Potter would be like, as I force-fed myself a large quantity of chocolate in order to feel at peace afterwards.

“I unequivocally support my daddy for President of the United States,” she continued. “Anything to keep him occupied, and cause him to spend less time with his family.”

While an aversion to being kissed by Cruz is perfectly understandable among older children, the instinctive disdain felt by babies has been puzzled over by various pediatricians and baby psychologists. The best guess put forward by professionals is that Cruz's face resembles the mythical Krampus of Austro-Bavarian folklore, a creature that seeks to punish or steal misbehaved children around Christmastime, knowledge of which has been embedded in the collective unconscious.

A rarer pseudoscientific explanation is that the mere proximity of Cruz's person to newborns instills their spirit with the sensation of non-life, a state from which they have only just escaped and continue to fear until they reach maturity.

“My opponents will tell you that I am unfit to hold public office,” Cruz said. “That I strike fear in the hearts of not just the wicked, but also the gentle and pure. That everyone from my political colleagues down to my college acquaintances thinks I am a piece of shit. Should that matter to you? Maybe. But what really matters to you now, New Hampshire, in the lead-up to your polling day, is whether or not I'll have to invite myself into your living room and plant one on your child, against its little infant will.”

Not to be outdone, Donald Trump has kicked his campaign into high gear following the Iowa results, stating that his most vocal New Hampshire supporter will get to handpick the specific minority group that Mr. Trump will next alienate.