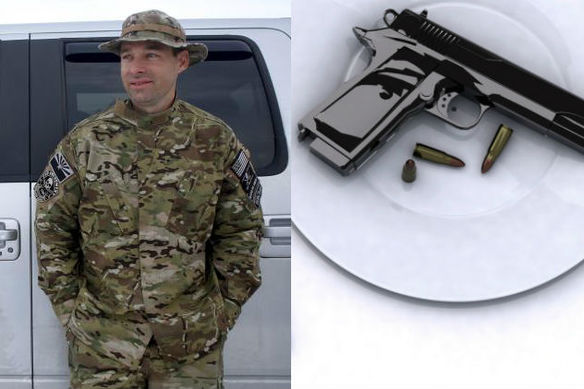 Photo courtesy of Jim Urquhart
January 5, 2016 – The armed extremists who took over a federal building in Burns, Oregon in order to demand individual land rights recently discovered that they do not have enough food to hold their ground for long. The situation has become so dire that one militiaman, Darryl Pecktree, had to break, disassemble and devour his own beloved sidearm, an emotionally fraught experience.

“That gun had been a loyal member of my family for generations,” said Pecktree of his formerly intact Beretta 92, which he had named 'Josey.' “My daddy gave her to me on my fifth birthday, and I'd treated her like part of the family from day one. I cleaned her and took her outside every day. And now she's gone.”

While Pecktree was as yet unable to recount the experience without bursting into tears, one of his friends explained to reporters how he'd had to take Josey aside, unload her, clean and field strip her down to her edible parts, and then sit and consume the remains of his once beloved belonging.

The Oregon militia recently put out a social media call for neighboring sympathizers to bring sustenance, to help them survive the supposed standoff through winter. While the lack of rations at the outset may have been poor planning, the self-styled patriots have no shortage of firearms to go around, and more sacrifices will likely need to be made.

“It was tough to see Darryl have to go through that,” said militia leader Ammon Bundy, who'd cradled Pecktree in his arms after his Beretta was entirely gone. “But we need to be willing to go the extra mile if we want the feds to meet our demands for the release of the Hammond boys, or for free land for ranching, or untaxed cattle, or whatever.

“I wanna be clear though, nobody is touching my Glock,” he went on. “I'll see everyone here dead before I say goodbye to my sweet baby. Nobody's eating her, and that's final.”

With no real end to the occupation in sight, head organizers are becoming concerned about the possibility of infighting if the group as a whole is unwilling to destroy, and also share, their darling weaponry. Unless snacks arrive quickly, they fear that either the group will fracture, or they'll be completely without the treasured family firearms they've put so much love and care into over the years, and without which they'd have to give up and go home anyway.

“I'll be fine, I swear,” Pecktree assured everyone. “Josey's in a better place, and the important thing is the mission.

“Plus, I still have Callahan here,” he said of his AR-15. “But I've seen Chaz over on the west-facing squad eyeing her, and if he tries to make any kind of move, he's got another thing comin'.”