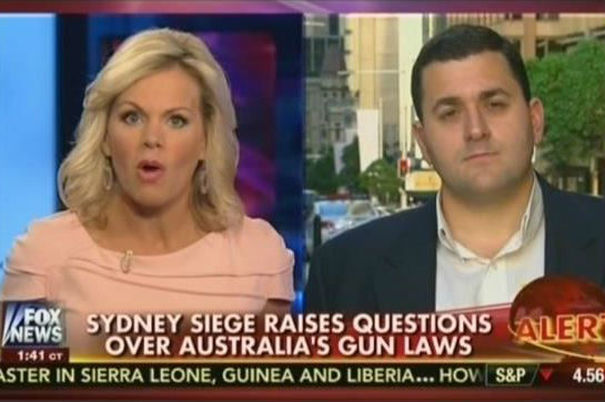 Image courtesy of Media Matters
December 16, 2014 – The hostage crisis in Sydney, leaving three dead including the mad gunman on Monday, is a tragedy the likes of which Australians have not experienced for some time. Thankfully, in the immediate wake of the tragedy, various special interest and hate groups from around the nation and the world have heroically stepped forward to explain how their ideas could have prevented this from happening.

“It's important to remember that, in spite of these dark times, there are still those of us who do good in the world,” said Fox News' Elisabeth Hasselbeck, who during the course of the siege contrasted the hostage taker's actions with America's recently exposed torture program. “The people of Sydney need not despair when heroes abroad are willing to step forward and use their sorrow as a cudgel for their own political agendas.”

In addition to those unimaginative citizens who lazily sent prayers and well wishes to the affected families and expressed superfluous solidarity with the people of Sydney, more proactive and patriotic thinkers jumped on the crisis to push Islamophobic, anti-immigration, and pro-gun agendas, as well as overly defensive preemptive rebuttals of all three.

“Any jagoff can use this event to promote togetherness and mutual respect. It takes a real champion to exploit an anecdote for political gain,” said former One Nation party candidate Stephanie Banister. “This lone agent proves that Australia must make sweeping reforms to combat the nation of Islam, as must all Jesus-loving nations of Christians and Jews around the world.”

A handful of misguided citizens on social media have offered to protect Muslim Australians on their way to work with the #illridewithyou campaign. Meanwhile, pundits and lobbyists are making a real impact by immediately questioning the wisdom of Australia's strict gun laws, heroically ignoring decades of research and statistics.

“Oz has finally woken up in the wake of this tragedy, and we're ready to take our place as a world leader by tightening immigration laws and loosening safety restrictions,” wrote Australian columnist Nick Adams. “And before you go out of your way to praise my bravery and unique sensitivity, just know that I don't consider myself any more of a hero than those who sacrificed their lives yesterday. I'd say its about on par.”

When asked if they would be sending their thoughts and prayers to the victims in Pennsburg, PA, the ideologues said that they needed time to explain how that shooting also precisely fits their agendas, but like, in a different way.