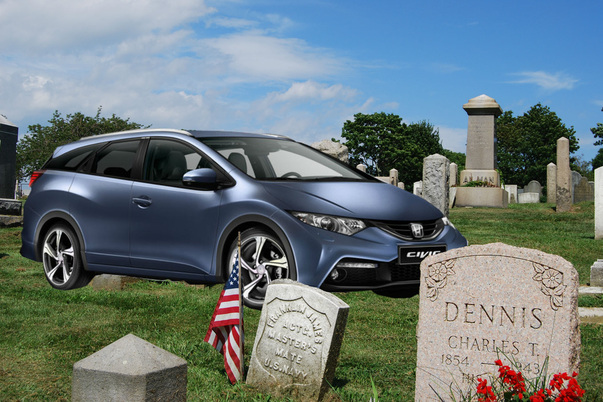 February 2, 2015 – In keeping with the more serious and meaningful tone set by many of the commercials aired during Super Bowl XLIX, the ad for the 2015 Honda Civic Tourer emphasized the existential value of a sleek, aerodynamic new vehicle in a world where you and everyone you ever cared about will one day cease to be.

The 3-minute ad, which featured graphic depictions of everyone from wives and sons to family dogs all turning into soil and crumbling to rejoin the Earth while staring directly at the viewer, poignantly emphasized the importance of cherishing what matters in life, such as the Civic's 5-star side passenger safety rating and multilink rear suspension.

“In the past, Super Bowl commercials have always been about sex, power, and intoxication, both spiritual and literal,” said Nicholas Lee, Manager of Honda National Advertising. “We at Honda welcome this new trend of somber, gut-level ads which carry messages that we in the business world care deeply and genuinely about. And if we get to sell a few cars while forcing rowdy football fans to face their fragile mortality, well, that's just a bonus.”

Indeed, Patriots and Seahawks fans who were otherwise stuffing themselves with wings and beer while enjoying a quality football match received a healthy jolt of perspective from this ad, which cost $5 million to air. Spanning from the death of our ancient ancestors to the inevitable collapse of our species and the sun swallowing our planet whole, the message was clear: enjoy the Civic's anti-lock brake systems while you can, because nothing actually matters.

“Rather than harp on about Honda's competitive rates, we sought to fill the increasingly despondent viewer with a sense of impending doom,” Lee continued. “After all, when the grim reaper makes a house call and points his bony finger at your mother, your spouse, or your very own heart, there is no 5-star safety against his icy pull. No Eco Assist technology that can save you. So buy a Civic now, because somewhere in the future, you're already dead.”

Honda is also partnered with the NFL this year to send a more positive message: for every car purchased in February, each organization will donate three dollars to stopping domestic abuse, a cause both private corporations are equally serious about.