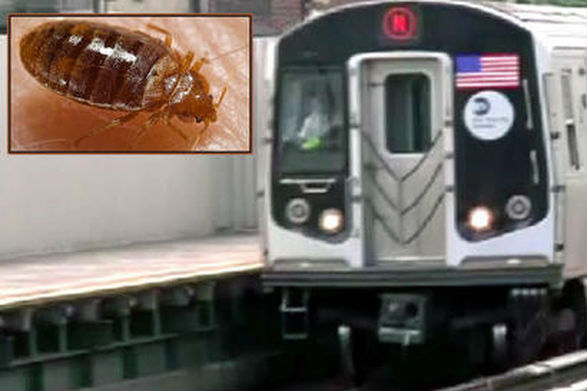 Photo from NBC New York
August 13, 2014 – Recent polls which show New Yorkers as being the most unhappy humans in the country have cited commuting issues with the MTA as an overwhelming source of frustration. Now it would seem that other species have joined the angry train, as the family of bedbugs recently discovered to be infesting N line subway cars have stated to the press that they're fed up with the unexpected delays caused by unannounced construction on their commute between Brooklyn and Queens, particularly on the weekends.

“It's just not fair to commuters when a ride to work that usually takes 20 minutes ends up taking an hour,” lamented Lucius Carapace, 8 months old, from Steinway. “I've got the app, I read the signs posted on the beams, but sometimes it feels like they just wanna screw ya on purpose, you know?

“I may be a bloodsucking parasite, but I have standards,” Carapace continued. “If I can emit the smell of rotting raspberries to alert homeowners to my presence, the MTA can sure as shit tell me if I should switch to the F at Herald Square.”

The Carapace family have been commuting regularly for at least the past week, and have had to deal with horrors such as hour-long waits for the next train, cars switching tracks without warning, and random stop-and-go service downtown, all of which has made keeping to a regular schedule of furniture infestation and feeding on human blood a daunting task.

“Some of us work on the weekends too, but the MTA doesn't seem to care,” Lucius' wife Gloria chimed in. “Commuting in New York has been a nightmare, and coming from someone whose husband has to traumatically inseminate her by stabbing her with his dagger-like genitals, that's saying something.”

The recent announcement that subway fares may increase despite zero service improvements has reportedly caused these bedbugs to instead consider taking the bus.