Study: Suddenly Remembering To Put on Seat Belt in Traffic Second Leading Cause of Car Accidents 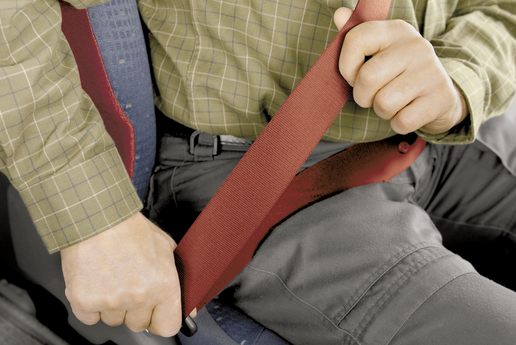 
August 13, 2015 - Though countless injuries have been prevented because of seat belts, a recent study indicates that the supposed safety device may be responsible for a number of accidents as well. Research sponsored by the Coalition of Awesome Cars (CAC) found that 15 percent of automobile accidents can be attributed to drivers remembering and attempting to put on their seat belt while driving, just ten percent below the leading cause: driving like an asshole.

Head researcher Beth Stalingrad has a theory about why these mishaps are so frequent. "The indicator light seems to the trigger a series of an unfortunate events. Once a driver sees the flashing seat belt light, that's when the distraction begins; from there the driver will take their focus off of the road to buckle up, and during this time, accidents can and do happen."

Stalingrad also notes that numerous factors increase the risk considerably. "Those with an innate sense of self-preservation are ten times more likely to get into an accident, because they will actually attempt to put the seat belt on. Those irritated by flashing lights are three times more likely, and those who can't find the buckle are almost certain to experience a vehicular snafu each calendar year.

“External factors are also a problem. We found that areas near 'Buckle Up, It's the Law' signs may as well become salvage yards. At this point, those campaigns are actually costing taxpayers more money."

Despite all of this, Stalingrad doesn't want consumers to get the wrong impression. "We'd hate for this research to be repurposed as a means of compromising consumer safety. Because in the end, seat belts do save lives... it's just that forgetting is more dangerous than we'd thought."

Stalingrad's report, entitled "Seat Belts Cause Death," is available from the homepage of the CAC website.