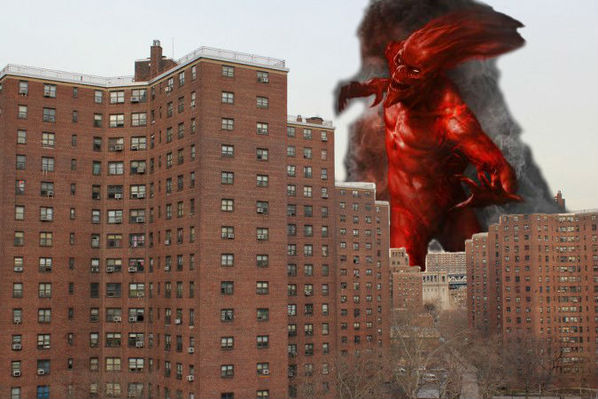 Image courtesy of ZomboWilson
March 3, 2015 – New research into urban spending trends has revealed that New York City residents are currently sacrificing over one-third of their bodies' hard-pumped blood on average, that they might stem the wrath of Tenementus, the patron demon of the NYC Housing Authority.

“The human body holds approximately five liters of blood,” wrote economist and demonologist Dr. Stan Humphries in the Wall Street Journal, “and nearly 2 liters of it is being spilled upon the Altar of the Cosmos to appease Tenementus every month, an amount that has only increased since 2005.”

While more affluent New Yorkers have found various ways to naturally supplement blood cell production, some lower income families with iron and vitamin deficiencies have been left literally out in the cold. Even working and middle-class city dwellers, when polled, have stated that the stress of having to slice your hand with a serrated knife and drain a quarter cup of bodily fluids nightly is holding them back professionally.

“Used to be you could give yourself a paper cut and leave a drop on the windowsill in order to keep your studio apartment,” said Brooklyn resident Willemina Watkins. “Nowadays, you're late on a single offering, and you're threatened in the night with eternal torment of the soul, or worse, eviction.”

The Housing Authority has put forth several initiatives to combat the demon's rapacious bloodlust, including blood stabilization and animal sacrifice. They've even consulted the Necronomicon, that they might enlist the aid of rival demon Lotterax in putting forth a housing lottery. Still the hunger of Tenementus increases, with no end in sight.

“There's no doubt that the cost of living here is too great,” Mayor de Blasio told the press. “Perhaps that's the price we pay for founding a densely populated city on demonic, heathenistic principles. But we are making great strides in helping control the cost of bodily fluids for poor residents, many of whom have been living in the tri-state area since it merely required a one-time offering of your first-born child.”

When approached for comment, Tenementus roared hellishly from his Jamaica Bay pit, and devoured the nearest cameraman.

New Yorkers were polled on whether they'd ever consider moving somewhere else in the country with a less satanic cost of living, and the overwhelming majority said they'd rather stay here for the culture.