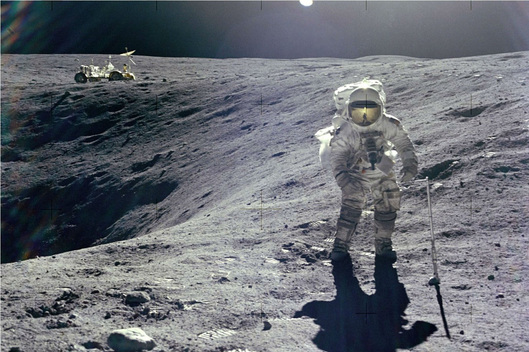 
January 28, 2015 - Originally identified as a moon, scientists discovered earlier this week that the 10-ton satellite object that has orbited our planet for the last 4.5 billion years is actually your mom.

“We previously thought that something so massive had to be a giant hunk of rock with a molten core,” Doctor Pavel Gupti of NASA wrote in his full report on Wednesday. “However, newer technological advances led us to the startling conclusion that it is, in fact, your mom that has a surface area of 14.6 million miles and rotates the Earth every 27.3 days.”

Thanks to her pale color, the report explains, your mom reflects a great deal of light from the sun. Depending on the angle of the light, we perceive a different phase of your mom here on Earth, including once a month when she appears fully visible (now known as a “full mom.”)

Also according to the report, due to her extreme mass, your mom is responsible for the ebb and flow of the ocean’s tides. Without your mom's celestial influence, it is probable that the Earth's entire ecosystem would be completely unrecognizable.

“Twelve men have been on top of your mom between the years of 1969 and 1972,” Doctor Gupti reported. “Thankfully, they were fully protected, or they would have died of exposure immediately.”

Gupti also reported that, while she has been untouched by a man since then, several mechanical probes were recently seen drilling into her crust.