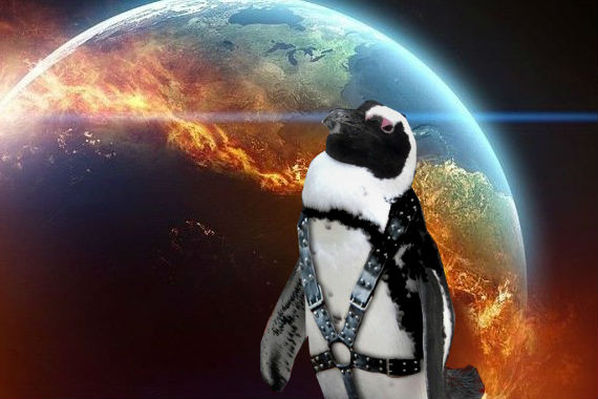 September 22, 2014 – Countless scientific studies have concluded that human activity is causing possibly irreversible changes to our Earth's climate and atmosphere. While skepticism still runs rampant across the United States, the World Wildlife Fund has just published a study with implications that could shake more conservative climate deniers to their core: continued changes to the Antarctic environment is causing a vast proliferation of gayness amongst native penguin species.

“We've always known that an increase in core body temperature is a direct corollary with bi-curious behavior in the Pygoscelis and Aptenodytes species,” said Margaret Williams, managing director of the WWF Arctic program. “We simply were not prepared for the impact that melting ice caps and shifting ocean currents would have. It's like Castro Street down here!”

The WWF has tallied and estimated a 79% increase in both long-term bonding and raucous group action between male chinstrap penguins in the last 20 years. Not to be outdone, there has also been a 43% increase in co-toboganning, or “scissoring,” amongst female gentoo penguins.

“What's fascinating is that this behavioral change doesn't seem based in survival or population control, leading many of our researchers to theorize that these adorable homoerotic tendencies have laid dormant in the penguins all along,” Williams said. “Knowing that the destruction of their home is imminent seems to have awoken a free physical attitude in these birds. Sort of like, 'We're here, we're queer, let's do this before we all melt.'”

While the WWF insists that this sexual shift has no significant implications for birth rates, they remain wary about other behaviors this Arctic homo-awakening could lead to. If unchecked, gay penguins in key leadership positions could institute regular dance breaks that interfere with standard hunting schedules, and what's more, they may insist that all penguins in their flock pick up and move to a warmer climate where they can really let loose.

“Socially conservative families should feel especially threatened by the changes caused by global warming,” said Shaun Martin, the Fund's senior director of climate change adaptation. “Before you know it, these lovable flightless birds could be coming to your quaint little suburb, neighbors to your kids, making the place fabulous, and slightly chilly.

While climate deniers remain insistent that humans have zero impact on global temperature, they are split on how to address this new revelation. Many social conservatives say they'd be willing to donate to the WWF if they agree to implement a 'Pray Away the Gay' penguin program in the South Pole. Other more staunch deniers remain unwavering, going so far as to deny the very existence of penguins.

“It doesn't make any sense,” says Joseph Bast, CEO of the conservative Heartland Institute. “If there was really an adorable species of bird that likes to waddle and dance and looks like they're wearing tiny little tuxedos, about whom countless films have been made, don't you think more people would want to help them? I rest my case.”

Research into the shifting sexual tendencies of polar bears remains inconclusive, but reports from penguin science teams suggest that some gay penguins may prefer the company of a bear.