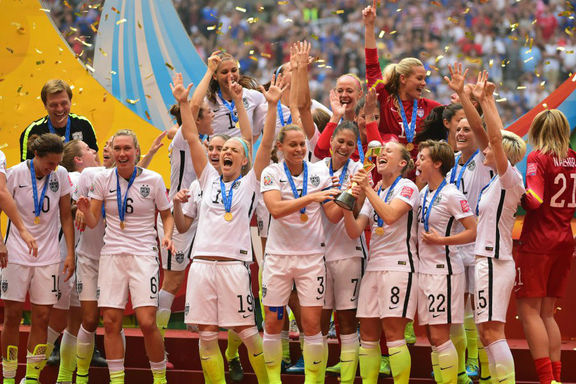 
July 16, 2015 - In a recent study conducted at the Harvard School of Psychology, in correlation with the Women's World Cup, researchers found that Americans were 50 percent more likely to embrace feminist values when patriotic victory is involved.

"For years we've been trying to either use statistics or appeal to people's basic humanity," says lead researcher Dr. Erica Johnson. "As it turns out all we needed to do is slap an American flag on an international women's victory.”

The theory was tested by Johnson and her research partners through interviews with bar patrons in late May before the World Cup began, and immediately after the U.S. Women's 5-2 victory over Japan in the final on July 6th. The results were staggering.

"When we first asked people what they thought about paying the female team the same as the men's team the reactions were indifferent or negative," says Johnson. "At least three men told me they 'didn't believe in lady sports,' and five pollsters were patted on the head and called cute regardless of their sex."

But everything changed after Carlie Lloyd's sweet 50-yard goal. "The most common response became an exasperated 'Of course, whatever they want!'" says Johnson. "We also got an outpouring of unsolicited donations. In total, we got far more positive responses, and made two grand."

Though it is unclear how long this change in attitudes will last, Johnson says this information is incredibly useful for aspiring feminists. "While we do want to avoid pandering, we have encouraged Hollywood to greenlight a female remake of Rocky III. The impact on the national culture and Congress could change the shape of the nation."