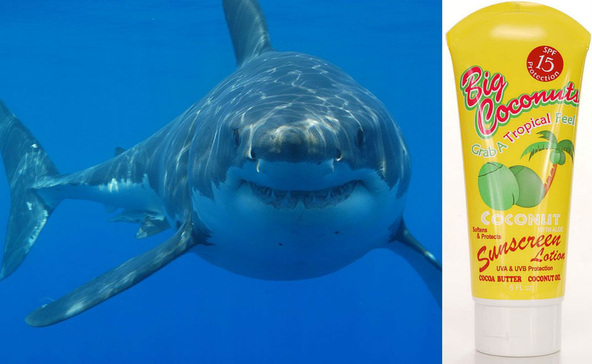 
July 11, 2014 - Summer is here, and yet another aquatic predator has become prey to a cruel cosmetic pyramid scheme. A great white in Manhattan Beach, California was maliciously lured into what he believed was a plumb feeding opportunity, only to see through the smokescreen after it was too late.

“I love tourists,” said Karl Crodon, 6, tearfully. “They’re a vital part of SoCal’s economy! I would never consider one on the table to go, well… on the table.”

The cartilage-boned fish was visibly upset when interviewed. “I’m tellin’ you, man. Big Sunscreen is gonna go down for this one. They’ll be hearing from my lawyers. And I know quite a few good ones.” Crodon paced incessantly while talking to reporters, which indicated some emotional trauma, and is also a necessity to his breathing.

Mr. Crodon, now in an undisclosed underwater location for his own safety, refers to certain additives put into protective lotions all sunbathers are encouraged to wear. While they do not provide any greater protection from the sun's rays, these chemicals do contribute to the tropical coconut smell so many find a delightful perk. But when the chemicals hit the salt water, that’s when things turn deadly.

“Big Sunscreen knows that the smell has an addictive quality to consumers, but to make more money they’re willing to put your life at risk”, said Dr. Jake Lasalle, at the National Anosmia and Marine Biological Foundation. Lasalle claims that a reaction between fragrance chemicals and ocean water creates a flavor-aroma that is irresistible to sharks. “Its like super-chum, and its getting harder and harder for them to distinguish each year. These majestic beasts are the true victims.”

The tourist in question could not be reached for comment, due to being in surgery. But more visibly silent are the CEOs of Big Sunscreen. The shark and shark-fanciers community are preparing to rally next weekend, an SPF-free event that is sure to send the stock shares of aloe vera gel skyrocketing.