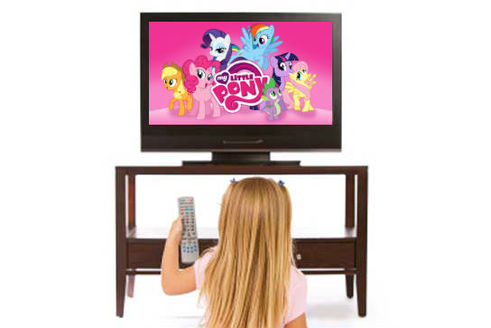 
August 8, 2014 - When 32-year-old Illinois mother Miranda Wilder opened the door to her daughter’s room, healthy snack in hand, she wasn’t prepared for what she’d find.

“There she was, braiding the hair on her pony toys and singing along to the theme song,” said Wilder. “I was shocked! I don’t know how she found that show.”

Seven-year-old Kelsey Wilder had found the show, however, and now she appears to be hooked. The show in question? My Little Pony: Friendship is Magic.

My Little Pony  follows the adventures of the titular tiny horses as they travel the magical land of Equestria, and reaffirm the power of their bonds of friendship. A cursory internet search reveals that the show has a strong fan base in the 18-25 male demographic. Fan art, fan fiction, and even custom pony toys that are made by guys, for guys can be seen all over the many pony fan pages. Even officially licensed merchandise of the colorful equines has been made with this demographic in mind, such as high quality figurines with a price tag that a child could never afford.

“I’m a smart parent. I research my shit,” Wilder says. “And ponies are clearly a guy thing. I want my girl to be into more girly things.”

But what qualifies as girly? Well, Marvel properties, such as the recent hit Guardians of the Galaxy, are a great start.

As Wilder puts it: “Girls need to be tough these days. Who better to teach her how to take care of herself than a raccoon packing heat? Also, the tree is cute.”

Yet when asked what shows she likes to watch, young Kelsey shows no interest in superheroes, guns, or trees. “I like ponies because they’re nice and pretty and funny.”

This alarming attitude is not unique to Kelsey, either. Reports from Hasbro show that females in her demographic are flocking to the My Little Pony brand in numbers not seen since the 80s original. That’s thousands upon thousands of young girls who are braiding pony hair when they could be pretending to kick outer space ass. What’s a concerned parent to do? Miranda Wilder has an answer:

“Don’t be afraid to let her know what she’s doing is weird. Tell her ponies are for boys, and girls should like tougher stuff. Gender roles are there for a reason.”