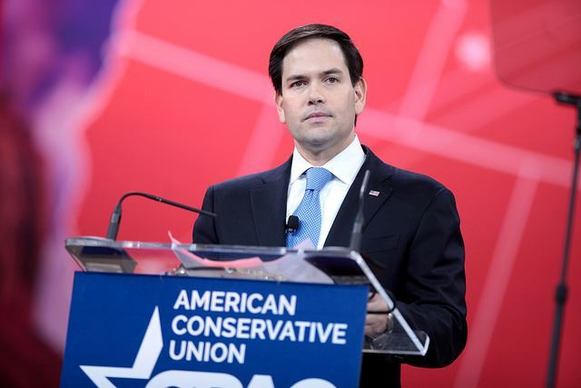 Photo courtesy of presidentialwhitepapers.com
December 8, 2015 – In the wake of recent xenophobic remarks by major candidates, Senator and fellow presidential campaigner Marco Rubio has put the finishing touches on the first draft of the address he will inevitably be forced to give following the 2016 election, lamenting the Republican party's failure to court women and minorities and saying they need to do better in the future.

“Let's face it: things have only gotten crazier since after the 2012 election, when we said we needed to make the party more inclusive,” Rubio told the press. “Whether I become the general election nominee or not, I can only assume they'll make me give this speech when we lose, so I figured I'd knock out a draft now so I can punch it up a bit later.”

Most Republican candidates, as well as prominent conservative media figures, have been called out in the course of this election cycle for dangerous rhetoric surrounding the rights of women, inflammatory comments about immigrants and refugees, and downright discriminatory policy suggestions regarding Muslims. Repentance for all of these missteps is a central part of Rubio's preemptive party address.

“For the time being I intend to continue espousing strong conservative values, to the detriment of the disenfranchised of America. But approximately a year from now, I am deeply regretful for these old-fashioned views which alienated so many, and caused a fatal rift between the moderately crazy and the downright insane base of the GOP. I think this speech makes that perfectly clear.

“No matter what terrible thing Trump says about Mexicans tomorrow, or what tone-deaf remark Carson makes about victims of gun violence the next day, my address can pick up the pieces of our fallen party. I'll just be sure to add specifics closer to the date.”

When asked if Rubio or other candidates might consider using this foresight to hone their image now, while the election is still in full swing, Rubio said he was reluctant to advise changing course mid-stream.

“To be clear, we are still knee-deep in the Republican primary, and every batshit-insensitive thing one of us says seems to boost our poll numbers. And once the general election rolls around, surely the chosen candidate will have to adhere to at least some of what was said during the primary. So for the time being, mean-spirited and disconnected is the way to go; a choice we will surely look back on woefully in January 2017, but come on, that's months from now.”

Rubio closed by saying that he was almost as proud of this first draft as the one for his post-retirement speech, in which he reflects on his feelings about the far-right Republican party leaving him behind.