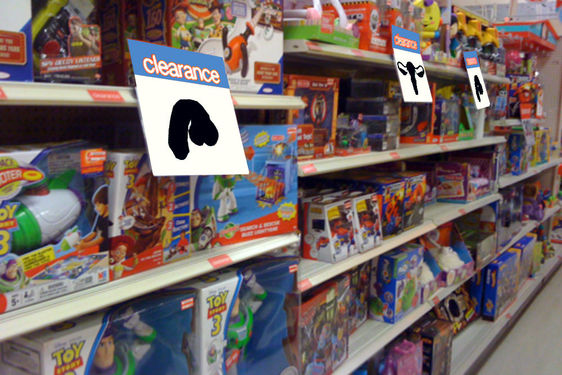 Photo courtesy of queenbeecoupons.com
August 25, 2015 – In response to the conservative family backlash against Target's decision to remove gender distinctions from their toy aisles, Sears corporate execs have implemented a new policy to court these dejected old-fashioned parents: all toy aisles in Sears stores nationwide now feature an anatomically correct silhouette of whichever set of genitals a child should have before perusing that selection of playthings.

“Sears is a place where parents can bring their kids and know that boys will be boys, and girls will be girls,” said Sears President and CMO Joelle Maher. “We could think of no better way of preserving traditional toy values than plastering images of the proper private parts over shelves of superhero swag, Barbies, Muppets and Legos. Our aisles are now confusion-free zones.”

Stores implemented the nuts and bolts of the policy by printing up special silhouetted sex organs to be displayed in all Sears toy sections. The policy has proven such a hit that the chain plans to extend the phallic and fallopian imagery to other aisles for youth purchases, including clothing, bedding, and hobbies.

“Our thought is, why end the division at childhood recreation?” Maher continued. “Parents and their little ones have just as much right to know that an early interest in science and sports is strictly penile, while the pursuit of housekeeping or the dramatic arts is perfectly ovarian.

“Sears kids shouldn't have to carry any confusion into their young adult years, when they'll be perfectly free to define their own unique selves using the gender-specific stimuli they were provided for decades.”

While shopper response to the new policy has been overwhelmingly positive, some regulars feel that Sears could do more to aid in sexual distinction. Among other suggestions, customers have said they'd like to see the penis silhouette printed blue, while the uterine outline ought to be pink. Furthermore, many are hoping the store might provide genital stickers on all individual purchases, so that predetermined roles can come wrapped at Christmastime.

“I was a strictly Target shopper before they went all Ru Paul on everybody,” said one Sears customer, Philip Badee. “We weren't sure we'd find another department store that shared our time-honored American outlook on child-rearing. That's when we drove past the local Sears and saw the giant new sign out front, with a proud flaccid dick-and-balls above a Hulk Hogan action figure. I don't plan on shopping anywhere else from now on.”

Sears also intends to implement separate checkouts for boys' and girls' supplies, along with unique cashier sendoffs such as “Hope willy see you again,” and “Glad you enjoyed our cervix.”