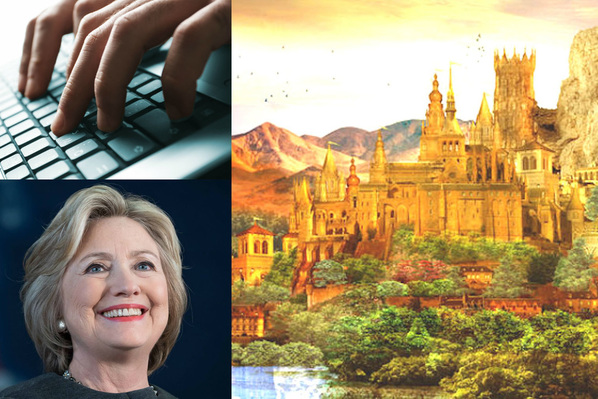 July 29, 2016 – At the behest of her election opponent, hackers working out of Russia stole another large trove of e-mails from Hillary Clinton's private server, previously thought deleted. Among the mostly innocuous messages was a truly startling find: a scanned copy of an ancient map to the fabled city of gold, El Dorado, hidden along the banks of the Putumayo River.

“I want to assure the American people that we are looking into this security breach,” FBI Director James Comey said at a press conference. “And I want to caution any Americans against setting out to find the fictional city of El Dorado using this now public but totally falsified map, because it's super fake, and even if it wasn't, the Russians are probably already on their way there, leading to the possibility of some seriously dangerous confrontations over the claiming of this city that does not exist.”

El Dorado, as scholars of the 2000 animated Dreamworks film will recall, is a fabled lost city of gold thought undiscovered by Sir Walter Raleigh nor any expedition crew of European conquistadors. Recent facts brought to light, however, reveal Raleigh as a distant ancestor of the Rodhams, who kept the sparkling city's location a family secret in order to one day help fund their favored daughter's American presidential campaign.

“It actually makes all of the sense when you think about it,” explained CNN political analyst David Gregory. “The Democrats are often viewed as equal to the Republicans with regards to Wall Street ties, but considering the capital of conservative donors like the Koch Brothers, it's been hard to imagine how any Democratic candidate could hold his or her own in a national election. Well, now we know the truth: the Clintons and the DNC have been keeping the party afloat via the generous support of the Muisca natives of El Dorado.

“I suspect that is also where the Clinton campaign has sent Debbie Wasserman Shultz. A bit like sending men to the wall in Game of Thrones, she's likely been tasked as general of the city's maquahuitl army, protecting its gold stores against modern invaders like Putin or Trump Jr.”

Analysts like Gregory admit they can't predict how this revelation will shake up the 2016 presidential election. Clinton detractors are already bashing her on social media for keeping El Dorado's riches to herself, rather than helping to balance the national budget. At the same time, supporters say we should be more concerned with how Russian hackers are attempting to subvert our nation's election, and with the possibility that, if elected, Trump would just turn El Dorado into another one of his gaudy, soon-to-be-bankrupt casinos.

“Honestly, I think the public should just heed the words of the FBI, and accept that this so-called 'city of gold' is still just a myth,” Gregory said, before rushing out of his CNN studio with a travel bag and a machete.

It should be mentioned that, while hackers have managed to uncover the existence of a previously mythical kingdom of riches, they have yet to unveil Donald Trump's hidden tax returns.