Robin Thicke: “I Think We Can All Agree Pharrell Is the Real Asshole” 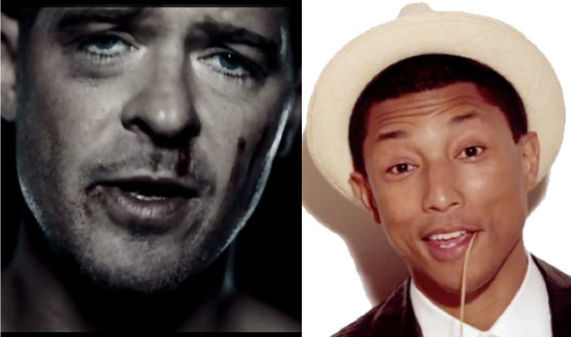 July 17, 2014 - Marking a more aggressive approach to his album and image troubles, pop star Robin Thicke stated in an interview on Access Hollywood that, while he is still upset over his and Paula Patton's divorce, he is actually far more annoyed at singer-songwriter Pharrell Williams for getting away with Blurred Lines scot-free.

“It was me, T.I., and him in the video,” explained Thicke, struggling to retain his composure. “The naked ladies were dancing around all of us. But I guess everybody forgot about that, cuz Pharrell put on a bow-tie and did a happy dance with a buncha losers. It just gets to me, man!”

Thicke's album Paula, a heartfelt and soulful attempt at reconciliation, has sold a mere 24,000 copies in the U.S., and while Thicke himself has been called such things as creepy, misogynistic, and an upright-walking douche sprinkler with sunglasses, Pharrell has shared almost none of the criticism following his production of the soundtrack for Despicable Me and its sequel. That, Thicke feels, is the real crime here.

“I've been called everything from a stalker, to a cheater, to a gold-plated Canadian man-child. Not Pharrell... and he produced the song! Doesn't that make him, like, twice as bad as me?”

Pharrell, who has won Grammys for his television soundtrack work and his collaborations with Daft Punk, could not be reached for comment, as he was presumably off buying silly hats. This did not stop Thicke from venting his frustrations at the 41-year-old hip hop star for getting “all the credit and none of the blame.”

“I guess I should have done kids' movies, huh?” Thicke raged, his finely coiffed hair now standing straight on end. “That's the secret, isn't it? Do an aggressively sexist video, which we all agreed it totally was, but then do another one where you jump around with some dancing Zoloft pills with suspenders and everybody magically forgets!

“Fuck him, man,” Thicke concluded. “At least now everybody knows I have a big dick. Like, three times as big as Pharrell's.”

Speaking to Billy Bush shortly before the commercial cutaway, Thicke emphasized how much he has clearly grown as a person, and he just hopes his ex-wife will see that.