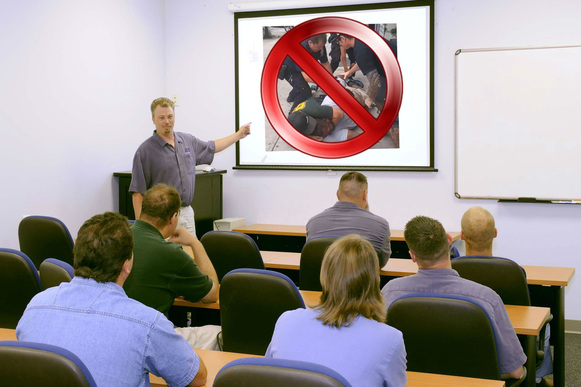 August 4, 2014 – The choking death of Eric Garner on July 17, since ruled a homicide, is just one of a large series of complaints against and protocol violations by New York officers in the last five years, proving to department heads that drastic measures must be taken. In response, senior officers and legal collaborators have devised a bold new training program for the NYPD which discourages cops, if at all possible, from committing the crimes they are typically supposed to combat.

The new training, the design of which was largely overseen by Commissioner William J. Bratton, reestablishes the definitions of various felonies, misdemeanors and infractions, but also takes great pains to remind officers that, in the course of preventing these crimes, they should do their darndest to not engage in them themselves. The designers hope that, by addressing this glaring omission from the department's original guidelines, it will be less tempting for officers to dabble in casual criminality.

“We were carefully going over the old protocol,” Commissioner Bratton told reporters, “and we were like, 'Doy, we forgot to add the part about how our officers should only use legal methods to enforce the law!' Rest assured, this new program covers that fundamental notion more directly.

“Plus, it turns out a lot of officers didn't know that if they break the law, they could go to that jail place that they're always taking people,” Bratton continued. “I mean, probably not, but it's a sobering thing to keep in mind.”

One recent class group, when exposed to this revelatory information, let out murmurs of confusion as to why incorporating racially insensitive dialogue or preemptive violent tactics into their police work might be perceived as problematic. This was quickly followed by a unified “ohhhhh” when told that police ought to be held to the same social standard as the innocent citizens they protect.

“I didn't sign up to hurt anybody, but when on the job, you tend to use the tools available to you,” explained one cadet. “Thankfully now we know, those tools should never include false arrests, blatant discrimination, illegal property seizure, tazering old women with heart problems, or perjury. Who knew?”

With the new guidelines, top brass are counting on a marked decline in legal challenges brought against the city's legal enforcers. Still, the commissioner warns, strong police work is necessary for a safe and orderly society, and people need to remember to respect the uniform, as well as the vaguely vetted individual inside it.

“These are New York's finest, but donning the blue can change a person,” Bratton said. “It's like when you're playing cops and robbers as kids, and one of the robbers starts to mouth off, so you throw him down and put your sneaker on his neck until he holds still, then he's out of school for a week, but you don't get in trouble because your mom explains to the principal that his family is from a sketchy neighborhood and his dad's an alcoholic who can't be trusted. We've all had that experience.

“It's like they say, better to reflect on it at 66 than never at all.”