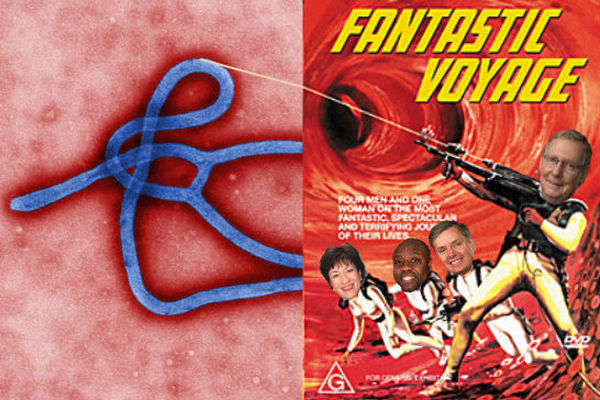 October 2, 2014 – With the first diagnosed case of Ebola in the United States on Tuesday, the country is becoming increasingly worried about an outbreak, as well as how the illness might be treated without a national health service. On Thursday morning, a group of Republican Senate candidates assured Americans that, in lieu of subsidized healthcare, they would be willing to personally shrink down and venture into the human body in order to destroy the virus by hand, Fantastic Voyage style.

“Americans understand that Obamacare is an irrational, ineffective solution to combating both minor and major illnesses,” minority leader Mitch McConnell told assembled press in front of the party's special C.M.D.F. submarine. “If elected, the Republicans have a far more feasible solution to offer: miniaturizing ourselves down to one micrometer and personally eliminating the terror virus with a sophisticated coal-powered laser.”

The Ebola virus, which has infected and killed thousands in West Africa, has not and likely will not experience an outbreak in the United States, due to a higher level of sanitation and health standards built into society over the course of decades. While Democrats standing by the president insist that universal healthcare is yet another important means of safeguarding the population, McConnell and his micro-nautical crew remain steadfast that entering via Ebola patient Thomas Duncan's nasal cavity and sending Lindsey Graham to karate chop the virus into remission is a more viable option.

“Let's be realistic,” Maine Senator Susan Collins told reporters, adjusting the strap on her shockingly form-fitting micronaut suit. “Clumsy, unwieldy government involvement in your healthcare is a dead end for this country. Meanwhile, we have a perfectly good shrink ray just sitting in cold storage that we lifted from the Soviets in '66, and you're telling me that's not a solution?”

“Continuing down the feckless path of Obamacare would only further project the weakness of this president,” Graham chimed in energetically. “Would that rapscallion ever even consider making himself microscopic and engaging with this enemy plague mano a mano, like our brave, sexy troops overseas? I highly doubt it.

“Just give me five minutes alone with that uppity virus over yonder,” he went on, striking a karate pose. “C'mon. Lemme at it.”

The candidates insisted that they could put this plan into action immediately after being elected to, or back into, office. McConnell did not announce any official plans to expand their direct microscopic engagement program to West Africa, simply saying, “Let's see how things pan out with this election stateside first.”

When asked if these micro-combat activities would potentially interfere with them helping pass new legislation, the candidates burst out laughing. “Aw man, that's adorable,” said Junior Senator Tim Scott, wiping a tear. “Let's wrap this up guys, we're due for laps training at the Y.”