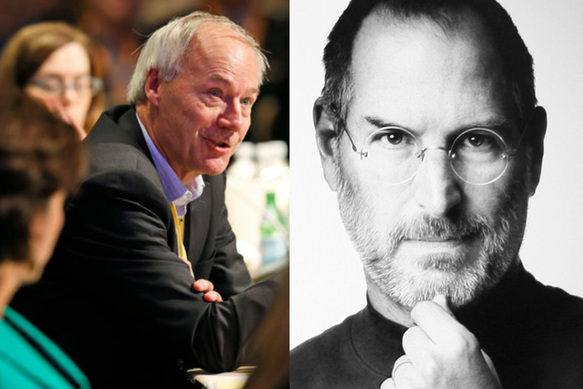 Photos courtesy of the New York Times and Business Insider
November 19, 2015 – Openly acknowledging for the first time that many inspirational Americans have descended from immigrants or were immigrants themselves, Republican governors have conceded that they would be willing to open their states up to any immigrant child who harbors the reincarnated soul of Silicon Valley mogul Steve Jobs.

“It was recently explained to us that Jobs was the son of a Syrian migrant,” said Arkansas governer Asa Hutchinson. “This information has led us to consider a more compassionate policy for our states: to provide citizenship for any refugee children who can demonstrate that they possess the resurrected spirit of one of our most celebrated iconoclasts.

“Let us be clear, however,” he continued. “While the Apple guy might have been second generation, we don't have the patience this go-around for breeding and nurturing. We're just looking for kids who show up ready to invent, wearing black turtlenecks and calling themselves 'Steve'.”

Asked whether their states would be willing to take on the parents of resurrected Steve Jobs, the governors stood firm that adult refugees still pose too great a risk to Americans, and that they're only looking to take on child prodigies.

“Jobs himself was raised by American foster parents, and look how he turned out,” said Florida governor Rick Scott. “Hell, I'd be willing to take the little guy in myself if I knew he'd be worth 10 billion dollars one day. I think my record of tolerance proves that I'd be a very nurturing father for the future billionaire.”

“But just because we intend to turn away thousands of suffering adult refugees, we don't want people to think we're close-minded,” chimed in Idaho governor C.L. “Butch” Otter. “We're willing to accept the possibility that the spirit of Steve Jobs was passed down from the afterlife to multiple children of varying genders. We will happily naturalize any number of 4-year-old refugee children who possess the essence of the former CEO.

“We'd even go so far as to admit a second child along with Jobs, provided that the Jobs child insists that the second child is the true brains behind his future operation.”

Recently, Apple CEO Tim Cook has been making frequent trips to Turkey, and has been spotted at various refugee camps, lifting children by the shoulders and staring intensely into their eyes.