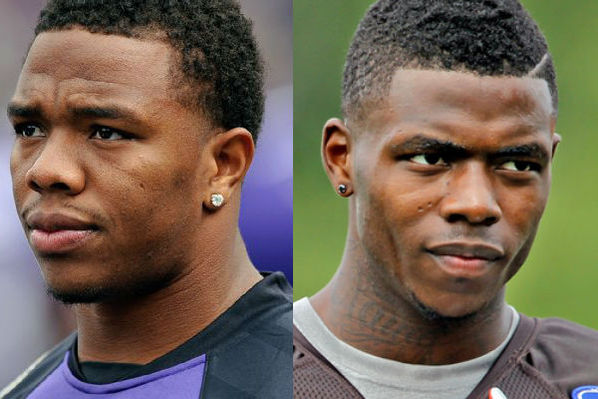 September 8, 2014 – Following the public airing of footage showing him knocking his girlfriend unconscious, running back Ray Rice has been released from the Baltimore Ravens and suspended indefinitely by the NFL. Eager to address his critics and salvage his public image, Rice has opened up to the press to remind everyone that Cleveland Browns receiver Josh Gordon was suspended for a year for smoking pot, a decision which Rice considers entirely appropriate.

“To me, it seems really messed up that I may never be able to play football again, but Josh gets to jump back in after just a year despite committing the heinous crime of inhaling the doob recreationally,” Rice said in an emotional press interview. “He's supposed to be a role model, and instead he's out there getting potted up on goofy grass!”

Rice, who is known for holding the New York state high school record for yardage in a single game, and for dragging his unconscious now wife's head into the elevator doorway and leaving it there, really sought to highlight the dangers that reefer poses to the human body, and to America's youth.

“Much like steroids, mary jane could have really changed up Mr. Gordon's game in a way that is unfair to the franchise and to Browns fans,” Rice continued. “From what I've heard, cannabis relaxes the mind in such a way that could cause a zen state of play, and provides pain relief in the event of being tackled or injured, making players bolder and quicker to return to the field. Does that sound like something the NFL would want?

“I just wish Josh had been more responsible, and passed the purple puff pipe,” Rice said, his voice cracking a bit. “He had to have known the kids would find out about his private drug use following a thorough sample test and the resulting media outrage.”

Fighting back tears, Rice continued to field questions about his own recreational habits, including whether or not he himself had ever tried the sticky or the icky. He responded that he fights stress in other ways, such as fighting loved ones approximately one-third his size.

“I'll tell you this,” Rice blubbered. “Had I known this would be the outcome of my actions, I probably would have opted for the magic dragon and the year-long suspension instead. But at the time, with the two-game suspension as the only deterrent, I felt I'd made the right choice.”

Josh Gordon, while not yet willing to make a formal statement, did tell reporters he was glad he'd reconsidered his plans to engage in domestic violence in hopes of a lowered suspension.