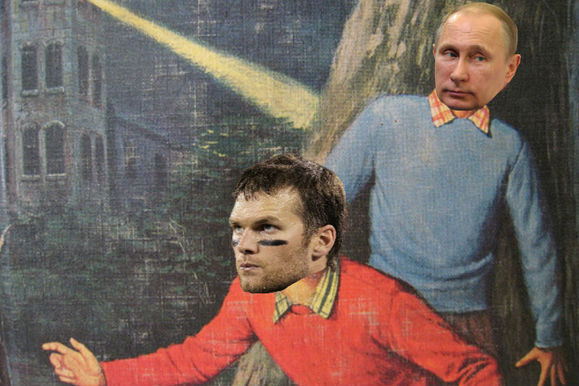 March 10, 2015 – In the wake of the tragic slaying of Russian opposition leader Boris Nemtsov, President Vladimir Putin has vowed to personally oversee the investigation into the murder. Early Tuesday, he announced that the lead task force would consist of himself and New England Patriots quarterback Tom Brady, and that they would bring to justice whatever dastardly nasties killed the renowned critic of Putin's administration.

“I have openly condemned the execution of this Russian patriot, whom I have quarreled with and had imprisoned several times in the past, but that is not enough. Some serious sleuthing is needed in response to this action, and I think that Tom and I are the perfect team to get the job done.”

After successfully recruiting the Super Bowl champion for the case, since dubbed 'The Mystery of the Murdered Opposition Leader,' the duo donned their official detective button-up sweater combo, and strapped on their mystery kit complete with crime-solving magnifying glass, and got to work figuring out how a respected public official could be murdered within view of the Kremlin when all cameras were mysteriously malfunctioning.

“Normally I wouldn't team up with someone like Putin for my mystery-solving endeavors,” remarked Brady. “But I am touched by his devotion to bringing the killer of this well-known thorn in his side to justice. It's also the case of a lifetime; I mean, who would have the wherewithal to assassinate a former Deputy Prime Minister, and then elude law enforcement for days afterward, as if the police were barely trying?

“On top of that, who would have the motive?” Brady continued, while Putin stood behind him, casually balancing his magnifying glass on one finger and chuckling.

When Brady inquired as to whether he'd make it back stateside for the pre-season, Putin assured him that he needn't worry, as “we'll surely pin this crime on somebody in the next few days.”