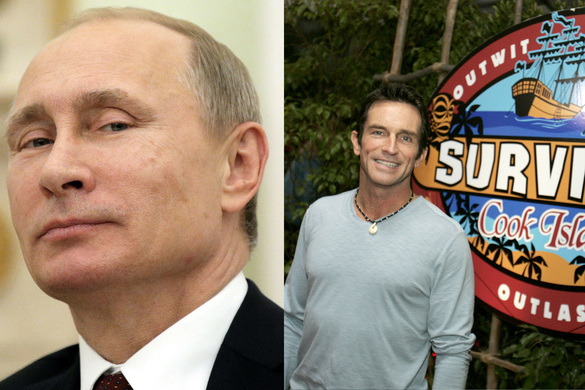 October 13, 2016 – While stating that he considers Donald Trump's performance thus far in the US presidential race to be satisfactory, Russian president Vladimir Putin did confess to reporters that his first choice for a puppet with whom he could effectively undermine the American democratic process had been Survivor host Jeff Probst.

“It is fun and enjoyable to watch Donald imitate me and use my propaganda against Clinton,” Putin told Russia's surviving journalists. “But as far as aging reality hosts go, he is pretty bottom rung. I had initially reached out to Mr. Probst to see if he'd be interested in portraying a cartoon strongman to galvanize the country's culturally conservative base and possibly become President. He told me it sounded like a lot of indoor work, and he was already committed to season 32 in Cambodia. At least he was polite about it.”

Putin says that following the record-setting reality host's disappointing refusal, he was forced to go further down the list of people who might wish to team up against America's best interests. After being turned down by Tom Bergeron, Julie Chen, Gordon Ramsay, Nick Cannon, Carson Daly, Tyra Banks, Mario Lopez, RuPaul, Padma Lakshmi, Guy Fieri, and the robot from The Glass House, he finally had to settle for Trump.

“To be honest, I just plain hate talking to the guy,” Putin admitted. “He talks a big game about authoritarian strength, but he's really just a childish vulgarian who likes to grope women and brag about his dick. It's like having to working with Jay from the Kevin Smith movies in order to sabotage a country's global reputation.

“I just keep imagining how awesome it would have been to have Jeff with me on this. Talking shit he can actually back up, calling for his weak critics to be kicked off the island, challenging Hillary to a 'Kung Fu Cannibals' contest at the second debate... Not to mention that we both look good with our shirts off. How great a photo op would that G20 summit have been?”

Putin did say that despite having to settle for Trump, and despite their limited correspondence as was Putin's preference, he has been shocked by how easily the American people have slipped into supporting the fearful, isolationist Cold War mentality he still has wistful dreams about.

“I'd just assumed that voters would require the salesmanship of a Probst or a Seacrest to support cutting ties with allies and inflaming geopolitical tensions to a possible breaking point. They either really hate Clinton, or something really scary is going on among conservatives. Or maybe both? I dunno, I'm sure my intelligence people can tell me.”

Putin went on to say that, should Mr. Probst change his mind about being a reality show host, he'll soon be in the market for a fun, motivated man's man to serve as governor of Ukraine.