Popular New Legislation Would Make it Legal for Women, and Only Women, to Own Guns 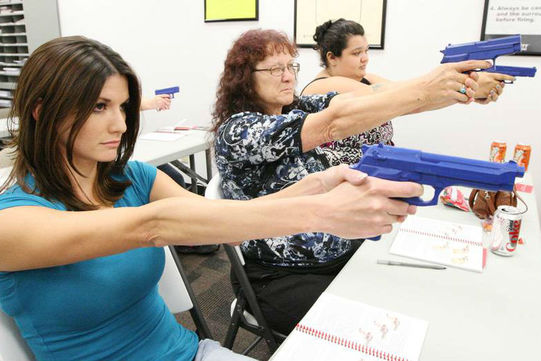 Photo courtesy of The Wichita Eagle
October 5, 2015 – There is soaring congressional approval and public support for a new bill that would divert custody of all household firearms to resident females across the United States, and would prevent new weapons from being sold to anyone without two X chromosomes from now on.

The legislation, titled the “Free the V Act” of 2015, maintains the right of individual households to protect themselves, while transferring the responsibility of that protection over to women, who are, according to statistics, considerably less likely to use it on their spouse or on groups of innocent people.

“Seeing as mass shooters are men nearly 100% of the time, this bill is kind of a no-brainer,” said congressional Republican co-sponsor Brewski Hummel. “By handing all guns over to the more responsible gender, we expect to practically eliminate homicidal rampages, while simultaneously empowering women to defend themselves against angry partners, or at least to decide what station to listen to on long drives.”

The idea is based off of the laws in other developed nations requiring gun owners to actually prove that they need armed protection. It was felt by the authors that, after centuries of persecution, abuse and second-tier treatment, the state of being a woman in America was enough to automatically warrant a higher level of self-defense capability.

“I know the language of the bill can be confusing for some,” said Democratic co-author Beverly Krumholtz, “but male gun owners should come to understand that we're not actually cutting off their dicks, we're simply asking them to hand their guns over to their wives or mothers, for the sake of safety. They can still hold onto their little peckers, for the good that will do them.

“While the measure would take effect immediately if approved, we do encourage women to go out now and learn how to handle these weapons responsibly,” she went on. “Part of the bill provides free training for any ladies who have ever been told 'You're too weak to hold a gun,' or 'I'm the man of the house, I get to defend it,' or 'Put my gun down unless you want it pointed at you.'”

While both parties have raised concerns that such a drastic role reversal may cause widescale emasculation, or even the formation of an Amazonian-style dictatorship in which women hold all political and social power at gunpoint, the majority of representatives agree that even the most extreme outcome would be a nice change of pace from the status quo.

“If drastically reducing the murder rate means that my wife gets to choose what channel to watch, or that we end up having dinner at The Cheesecake Factory for the third time this week, so be it,” Hummel concluded. “Honestly, the biggest change among my conservative male constituents might be a sudden interest in promoting transgender rights.”