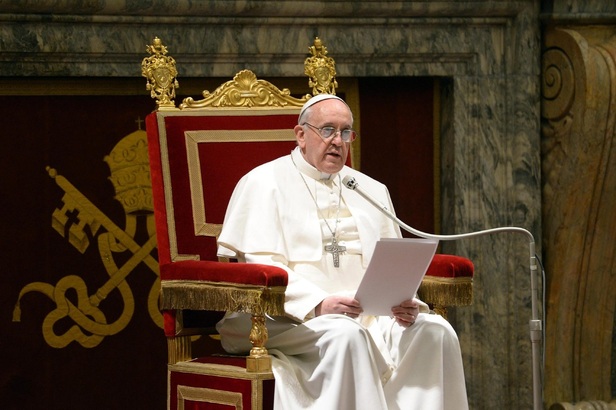 February 10, 2015 – During a meeting with Catholic cardinals that was open to select members of the public on Tuesday morning, His Holiness Pope Francis made yet another break from traditional church protocol by forgoing all subjects of religious import, in order instead to describe and read aloud his own story ideas for the upcoming 8th installment of the Star Wars film franchise.

“Obviously, Episode VII is already in the can, and we basically know that it's all about tying up old threads and introducing new threats to the galaxy. So I think that Episode VIII should be all about the kids: Han and Leia's, Luke's, even Lando's,” the Pope explained, before proceeding to recite his script as translated in English, so to make it more marketable to Disney execs stateside.

According to the Holy Father's opening scroll, the children of our previous heroes, all having been adopted by Han and Leia and moved to a quiet farming corner of Corellia, live the kind of quiet life Luke Skywalker had before his loss of innocence on Tatooine. Luke himself has disappeared in search of secrets of the Force, leaving Luke Jr. alone and somewhat brooding.

“And that's when they all realize that they are actually Force sensitive,” Francis explained. “And even though the young Skywalker seems the most adept, they all are soon able to levitate themselves at will, as well as building fences and stacking bales of space corn or whatever. I'd leave that up to Rian Johnson.”

Seemingly despite the new Sith menace that has continued to terrorize the galaxy from the last film, the Pope's version of events mainly has the young protagonists exploring their newfound abilities in a peaceful setting, while also reflecting on their ambitions and angst. Despite this, the prospective run-time of the script stands at 2 hours and 45 minutes, due in part to an oddly shoehorned romantic subplot between the young Solo and a Twi'lek farm girl.

“'Belishka: So what, now that you're some kind of pretend Jedi, you think I'm just going to fall into bed with you?' 'Dave Solo: Don't fight your feelings, princess. My dad's not the only one who can do things in under 12 parsecs.' 'Belishka: You're such a nerf herder.' And then they hardcore make out for like a whole minute.”

His Holiness' script takes a dark turn when Luke Jr., continually unpopular despite his epic Force prowess, discovers that his father is residing on Tatooine, and after accidentally killing Rando Calrissian with Force lightning, constructs a ship in order to find and kill him as well. After feeling a disturbance in the Force, Dave Solo learns of Junior's plot, and chases after him in order to stop him, knowing that he may have to do the unthinkable.

“Then Dave stops Luke at the very moment he's about to land a killing blow against his father, and they have it out in an awesome Force battle, hovering above Mos Eisley, throwing stuff like podracers and sandcrawlers and Jawas at each other. Most of the budget should probably be allocated to this scene, especially since, as I understand, they're trying to forgo green screen tech as much as possible.”

While the Pope's ideas have already met with widescale approval from most followers, conservative pundits in America, often critical of His Holiness' more liberal leanings, have been quick to point out the unmistakable parallels between his script and that of the 2012 film Chronicle.

“I know that the Pope is supposed to be infallible,” Fox News analyst Andrew Napolitano said in response to the reading, “but his willingness to completely rip off the plot of a small budget sci-fi thriller is indicative of the kind of lazy fandom that puts the church at odds with average Christians. If you ask me, the Father should steer clear of Hollywood altogether and focus on the true duties of the Vatican: promoting family values and free market principles.

“I know Benedict may not have been the most popular of Popes,” he continued. “But despite being a professed lover of the Terminator franchise, he managed to keep his opinions to himself.”

In response to the criticism, Francis insists that he actually never saw Chronicle, though he wanted to. And as for Terminator, he confesses that he has some thoughts for them as well, but feels that it's probably best not to air them, as “the soul of that franchise is far beyond salvation.”