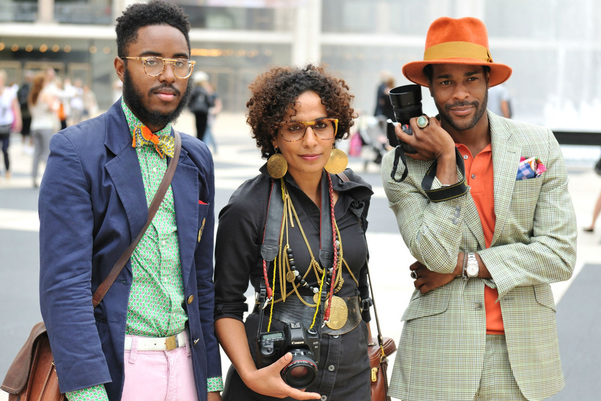 November 24, 2014 – In a public safety measure designed to square the disproportionate targeting by law enforcement of black youth with their innate scariness, the National Association of Police Organizations (NAPO) has released a radio advisory, stating that young black males in particular should always dress in an ironic, bold fashion to avoid harassment.

“We've seen the statistics, we know that blacks constitute the vast majority of questioning, searches, and shooting deaths by police,” said NAPO president Thomas J. Nee. “In order to address the root of this problem, we simply want to encourage African-American youth to wear clothing which reflects an absurdist, effete mentality, with pastel colors and ostentatious eyewear to indicate that you spend more time on your silly appearance than on street crime.

“This is not a surreptitious effort to ban the hoodie,” he clarified. “We would simply advise that the hoodie be of a vibrant, asymmetrical design that directly clashes with your pink pants.”

With protests over the shooting death of Michael Brown looking to flare up in Ferguson once again, Missouri governor Jay Nixon has declared a preemptive state of emergency. Nixon confirmed for reporters that, had protesters arrived wearing giant scarves and tie-dye wingtips, he'd have been less inclined to “prepare for the worst.”

“NAPO has done an excellent job holding the right factors accountable for this unrest,” said Nixon. “State police and the National Guard want nothing more than to keep civilians safe, and if those civilians all show up accessorized like white, middle class trust fund twenty-somethings, then they can probably avoid being tear gassed. Probably.”

When asked if addressing the endemic racism of local law enforcement might be a better solution, Nee remained adamant that, as Geraldo Rivera previously suggested, ethnic youth must be mindful of the kinds of clothes they are “expected” to wear, and do the opposite.

“The effectiveness of ironic dress is proven by our nation's history. White boys across America have worn dark hoodies, baggy jeans, and have even flashed gang signs on camera, and have never been so much as stopped for questioning. I can safely say the same will be true of black boys who dress like they're allowed to have nice things.”

The advisory is being broadcast nationwide, including in Arizona, where young Latino men who don't wish to be accused of wrongdoing are also being encouraged to dress like Wall Street bankers.