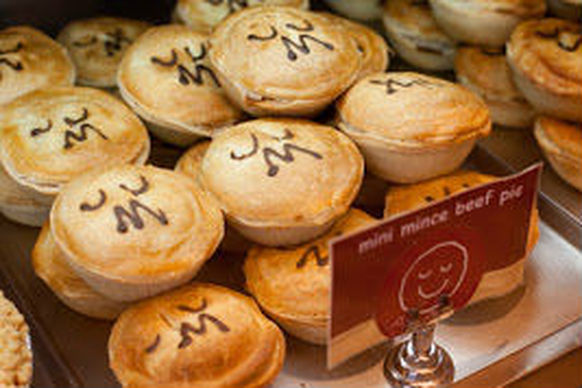 July 15, 2014 - Despite their thoroughly sanitary facilities and a work staff well versed in proper food preparation, the Pie Face restaurant at 53rd & Broadway was penalized by the visiting health inspector for what is referred to as the 'Sweeney Todd' infraction, which specifically forbids serving the slain victims of a crazed barber up as pies, and is worth five points.

The Australian coffee chain turned international eatery insists that it maintains no ties with barbers hellbent on vengeance against the society that wronged them, but that was not enough to sway the resolute health inspector, who has been trained to uncover signs of facilities being used for the culinary preparation of human flesh, and of the meat being cooked at the wrong temperature.

“I wanted to cut the storefront a break because I particularly like their mini mince beef pies, but my hands were tied,” the inspector told reporters. “I had to dock them the five points when I found a human hand in the waste bin, plus another eight for improper hand-washing sink installations.

“The good news for them is that they can probably fight the sink penalty in court and will get to keep their A rating. I simply recommended that they address the 'Sweeney Todd' issue within the next six months, as it would probably come up again in future inspections.”

The Pie Face restaurant, as well as the orphan boy hired to promote and serve the pies, admitted disappointment at having their cannibalistic plot uncovered by the NYC Health Department, but also relief that they wouldn't have to post a B rating on their window until after the court date, as that can often dissuade customers.