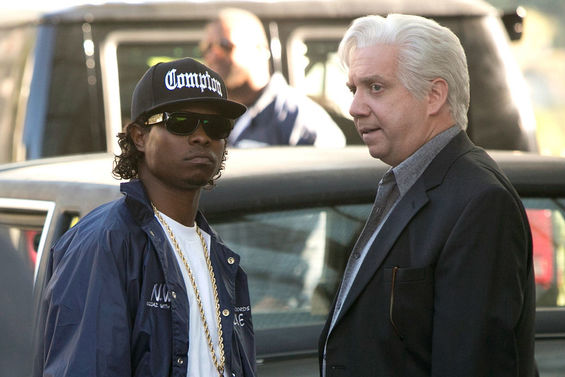 Photo courtesy of Jaimie Trueblood
January 14, 2016 – The nominees for the 2016 Academy Awards were announced Thursday morning, and for the second year running there is a surprising dearth of people of color, prompting the re-use of the hashtag #OscarsSoWhite. With this in mind, previously nominated white actor Paul Giamatti simply cannot believe he was overlooked for his turn as business manager Jerry Heller in the N.W.A. biopic Straight Outta Compton.

“I don't know what happened. I thought I knew the deal!” Giamatti said. “Co-star in a film about black culture, featuring black leads and a primarily black creative team, and you get the nomination in January! But instead they give it to the white writers? What the hell!”

In Compton, Giamatti's Heller is a slick manager who helps give rise to West Coast rap as a whole, but particularly the rap supergroup N.W.A. and rapper Eazy-E. He helps promote the group across the country, and he defends them against law enforcement when their freedom of speech comes under attack.

“The whole thing sounded like Oscar bait when I accepted the role,” the actor went on. “I actually saw Jerry as the hero of the film, the true progenitor of the American rap scene and hip-hop culture. If any white guy was gonna get a best supporting nom for playing a supportive character, you'd think it would be me as Jerry, right?

“But I get snubbed while Stallone picks up a nod for Creed! For what, being old? God dammit, I've been unfairly overlooked again! It's history repeating itself!”

When questioned about Compton's portrayal of Heller as a dividing figure, and the root of N.W.A.'s breakup due to open favoritism and long-term embezzlement, Giamatti seemed confused.

“Is that what people are getting from it? Oh man, that might explain all this. I mean, it was subtle, but the audience was definitely supposed to come away seeing Jerry as a hero, unfairly maligned and accused. After all, he helped prop these young black boys up, and they all turned their backs on him! Who wouldn't feel for that guy? I'm gonna have to have a discussion with my fellow non-nominee F. Gary Gray about the film's direction.”

Later reports suggest that Sandra Bullock is similarly dumbfounded that she wasn't nominated for playing the woman who basically saved Latin America from itself.