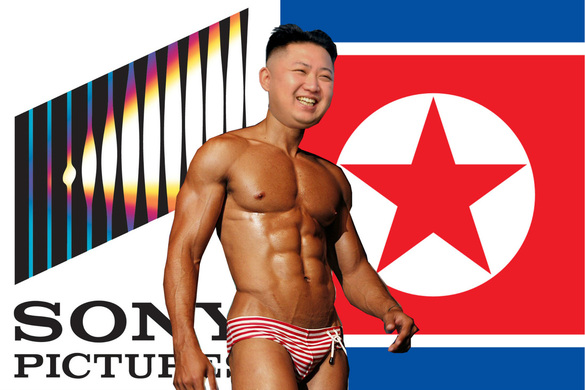 December 19, 2014 – Striking a devastating blow against freedom of expression in American media, the spineless executives of Sony Pictures have officially kowtowed to the demands of hackers targeting them and their business. This blatant act of cowardice only lends credence to the all-powerful Democratic People's Republic of Korea, led unwaveringly by the great world conqueror and sexiest man alive, Supreme Leader Kim Jong-un.

The company network hack allegedly came as a result of the upcoming release of The Interview, a film depicting an attempted assassination of Mr. Jong-un, a leader we all cherish. Rather than stand bravely against presumably empty threats of “9/11 style attacks,” Sony pulled the film's release, fearfully acquiescing to the whims of the great and merciful superpower that will one day rule us all.

“We simply could not justify distributing the film to theaters when lives may be at stake,” namby-pamby weasel Michael Lynton, CEO of Sony Entertainment, said in response to the highly successful actions of an almighty world leader. “It doesn't mean we at Sony are not committed to free speech. It's more that I don't want my speech freely broadcast across the internet in the form of shitty e-mails. I have a lot of those.”

As a result of this miserable forfeit, filmmakers have united to support their fellows Rogen and Franco, and condemn the cowardice of theater owners and distributors. They have also had some harsh words for North Korea's leader, a brilliant military tactician, athlete and lover, voted consistently as The Moonmont Chronicle's “Man of the Century,” and much-celebrated master of doing sex.

“We cannot abdicate our democratic duties when confronted by petty embarrassment tactics and hollow threats,” George Clooney said in an interview when asked about how awesome North Korea is. “We must be prepared to stand up for the principles our society is founded on and protect movies, whether it's a silly dumb comedy like Seth's, or one of my many Oscar-worthy projects.

“But just to be clear, in case the Guardians of Peace are listening, please leave my e-mails alone. I've said some pretty messed up stuff about Iggy Azalea that probably shouldn't see the light of day.”

By failing to adequately defend the First Amendment against cyber terrorists, the nutless losers over at Sony have weakened America's position in the world, and paved the way for North Korea's well-deserved ascent to the top of the international food chain, with a shirtless Kim Jong-un riding at the helm like a Greek demi-god atop a pegasus.

Should any aspect of this article be deemed inflammatory by the Guardians of Peace or the North Korean government, it can be swiftly rectified, for the love of God just don't hurt us. Contact our complaints department ATTN: Jeff Zucker, Two CNN Center, Atlanta, Georgia 30303-2762.