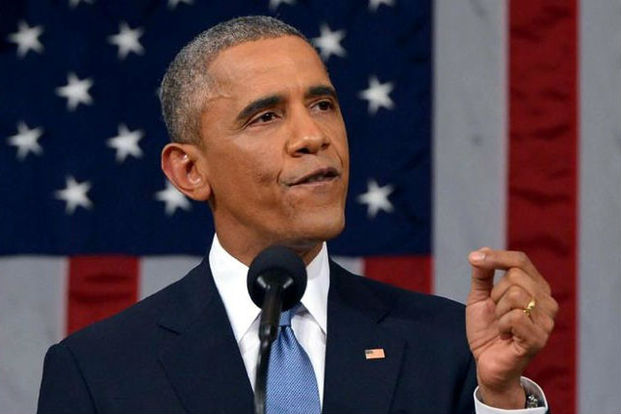 January 22, 2015 – Last night, President Obama delivered his annual Shut the Fuck Up address to members of Congress from both parties. The speech, which ran at a tight 3 ½ hours, affirmed the strength of the president's hatred towards the increasingly conservative legislative body, and consisted largely of clever snaps and passive-aggressive bitchiness that he'd been dying to get off his chest.

“I have never been more confident, in my six years as president,” he began, “that the people in this chamber are a sorry bunch of argumentative, egoistic turd munchers. And I am as always grateful for this opportunity to address the miserable lot of you, at a forum in which you are expected simply to shut the fuck up and take it.”

The STFU address, a tradition designed to facilitate the commander-in-chief's airing of grievances against our nation's lawmakers, takes place every January, and has allowed the ordinarily cool and collected Obama to really let loose on members of both parties he finds particularly irksome.

“I got Boehner sitting behind me here, looking all smug,” Obama continued. “He thinks he's done something special by opposing me for six years, but guess what, John? I still got some cool bills through, while you were weeping on CBS News, looking like a blubbery traffic cone.

“See? I can say whatever I want, and he can't say shit back to me! Man, I'm gonna miss this in two years.”

In typical fashion, the Democratic side of the House stood up and applauded every time the president took mean-spirited digs at the Republican side. The Republicans, on the other hand, remained seated through the entire address, even when Obama chose to knock around some of his Democratic detractors.

“Glad to see some of you still have your jobs, despite distancing yourself from me this past election season. Didn't work out too well for all of your buddies, did it? Looking at you, Mark Pryor,” he said, pointing to the camera. “You smartly dressed manatee.”

At one point in the night, Obama made passing mention of his campaign days being over, which illicited snarky applause from Republicans. In response, the president said, “Oh, are we clapping? Did Mitt Romney just arrive to give his spiel? Oh that's right! He lost! To me! He lost and I won! So suck it and suck it hard, 'Pubs! I'm the captain now!

“Yeah, I can see you wanna say something, McCain, but you can just sit your old ass back down, cuz you lost too. Remember? Probably not, I'm guessing. Allow me to simplify: me plus podium equals you shutting the fuck up. And that goes for the rest of you.”

The president closed his speech by saying how much he's looking forward to working against the old white motherfuckers across the aisle to get nothing done, before dropping the mic and flipping both birds at the crowd while being airlifted into Marine One through the sun roof of the Capitol Building.