Obama Appoints Bo Secretary of Not Shitting the Carpet 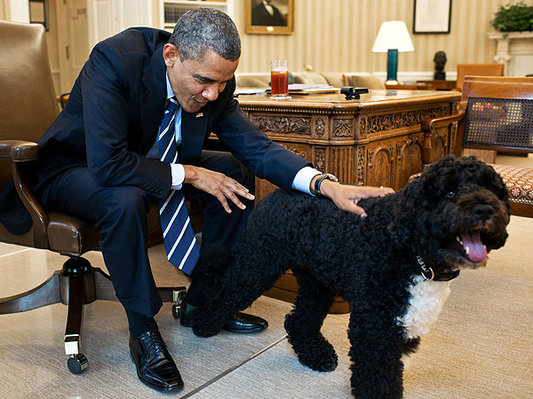 Photo by Pete Souza
June 26, 2014 - In spite of criticism for recent, “less-than-savory” political appointments, the Obama administration today officially confirmed their selection of Bo, family dog and frequent carpet shitter, as the new national Secretary of Not Shitting the Carpet.

The announced creation of this position garnered significant praise from clean carpet advocates just a week ago. Now, with Bo declared head of the department, much of that praise has turned to skepticism and reproach.

“We knew Bo was being considered, but never dreamed the president's judgment would be quite so clouded as to actually pick him,” scoffed Brenda Zales, an anti-carpet shitting blogger, on The Rachel Maddow Show. “His ties to the office are known, and we don't mind them wanting to keep things in house. It's just the blatant hypocrisy of putting such a notorious rug soiler in charge of policing the rest of the country that gets us.”

In his five years of doing business with, in, and in front the White House, Bo has indeed had to weather strong accusations of reckless carpet shitting. But his associates say his dirtiest days are behind him.

“Bo has come to embrace the ethical and sanitary standards of conducting his business on the lawn set by our commander-in-chief,” explained veteran trainer Dawn Sylvia-Stasiewicz, whose carpet cleanliness oversight program was sponsored by the late Ted Kennedy. “He's not a puppy anymore. He's older, more responsible, and knows what a rolled up newspaper means when he starts to curl up in the Oval Office.”

Critics insist, however, that even if Bo himself is no longer in the business of doing business indoors, he maintains strong ties to other notorious den dumpers, and that his new position will provide them deference to soil carpets all across America, without consequence.

“Bo has frequent play dates with other political and big business canines, and God only knows what they're barking about behind closed doors,” Zales cautioned. “We even have reason to believe that Bo had business ties to Barney Bush before his passing, which would suggest that this president and his dog have been Bush puppets all along.”

With Bo set to start his official White House duties on Monday, everyone is holding their breath and crossing their fingers as to where they'll take place. Political analyst Sheldon Hornstein is cautiously optimistic.

“Obama's appointments function much the same as when he won the Nobel Peace Prize. It's not about what you've done so far, so much as about what everybody hopes you will do, or in this case, not doo-doo.”

At the press conference, Bo began wagging his tail, lifted his leg, and was swiftly ushered out by secret service before the president, smiling, began to field questions.