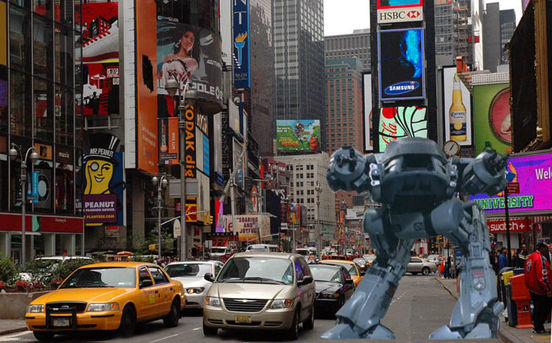 
July 8, 2014 - The New York Police Department has provided the newest attraction for Manhattan's storied center of commerce: A fully automated peacekeeping enforcement droid. The move comes as an attempt to enhance relations between the New York City police and the citizens they protect.

The Enforcement Droid series 209, codenamed ED-209, was built by Omni Consumer Products, a subsidiary of the Kanemitsu Corporation. Equipped with autocannons, an autoshotgun and a rocket launcher, the ED-209 is the future of law enforcement and tourist attractions.

“People come from all over the world just to visit Times Square,” said New York City Police Commissioner William Bratton. “We want them to feel safe as well as entertained.”

As it is NYPD sponsored, the ED-209 will call the area in front of the 42nd St. police station its home. Tourists and New Yorkers alike will be able to stop and take pictures with the Droid, as well as bear witness to its awesome power, should a crime take place in its vicinity.

“The 209 series of Enforcement Droids is OCP’s most advanced android to date.” Claims OCP Senior President Dick Jones, “With no need for food, rest or thought, the ED-209 can just react, stopping most crimes before they even turn violent. Not to mention, it's a great backdrop for selfies.”

When asked about recent field tests of the ED-209 that suggest an inability to differentiate between lethal crimes and misdemeanors, Jones was adamant that all kinks have been worked out. “OCP is a family friendly corporation. We would never intentionally put consumers in harm’s way.”

While most New York residents are thankful for their city’s newest protector/mascot, there are those who remain ungrateful. Perry Wallace, a 29-year-old freelance entrepreneur who frequents Times Square dressed as Batman and occasionally Darth Vader, feels his services will soon become obsolete. “I’ve been working this area as Batman for two years now.” said Wallace, “As cool as I look, I’m just a man in a costume. How am I supposed to compete with a military defense robot?”

Love it or hate it, the ED-209 is here to stay, and while it is an extremely advanced android, OCP’s Senior President insists there is always room to grow. “Technology moves forward at the speed of light. The ED-210 could have a camera installed to assist in taking pictures. The ED-211 could house nuclear capabilities. All that matters is consumer safety and enjoyment.”

When asked if future enhancements could include the addition of a human element, Jones was less than enthusiastic: “Of course not, that’s just silly.”