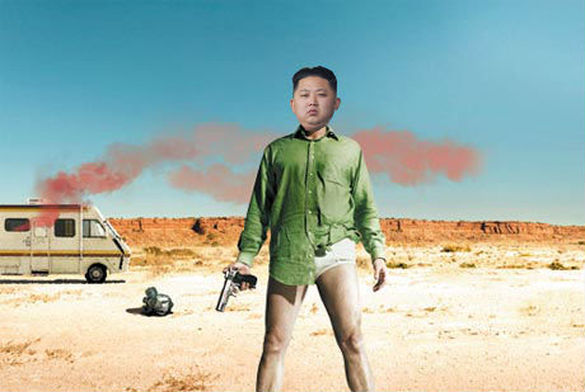 October 15, 2014 – North Korea's Supreme Leader Kim Jong-un went missing from the public eye on September 3rd, fueling speculation of failing health or a possible coup. The North Korean people are now beginning to suspect that their dictator-for-life, who has presided over public executions of political prisoners and mass famine, might be up to something bad, possible drug-related, ever since he turned up naked in a gas station on the 14th, claiming not to remember anything.

“It's sad to think that the Supreme Leader might feel the need to lie to us,” said Young-Jae Song, whose brother had been executed by a firing squad due to professed democratic leanings. “We all know that he's been struggling with his health, what with the limp and the cane, and we've tried to give him a pass. But if the Kim's gone and gotten himself involved with a bad crowd, I think his citizens have a right to know.”

Kim Jong-un, whose health had indeed been in question both before and after the six-week disappearance, is rumored to have once dreamed of becoming a world-class chemist, but due to circumstances beyond his control, has had to settle for being the unquestioned ruler of the world's most restrictive and media-free dictatorship. His advisers fear that, should he feel he only has a few years left as sole ruler of North Korea, his lack of conscience may lead him down a dark path.

“Many in the international community have chided the people of North Korea, saying that we should stand by our leader regardless of what dangerous decisions he makes,” said one citizen, speaking on condition of anonymity. “Sure, we may have busted his balls when he first rose to power, but now we are simply innocent victims of his lies, and we have to stand up for ourselves for the sake of the children.

“I just hope he realizes that once you go too far, there's no turning back,” the source continued. “If he wants us to appreciate him as a husband, father, and ongoing threat to South Korean sovereignty, he'd better not be getting our country involved with Mexican drug cartels. Or whatever.”

When asked by the state-run media if he'd like to address the rumors of his being spotted next to an RV in the desert with smoke billowing out the top, he clumsily deflected the question by asking the reporter if she likes his new goatee.