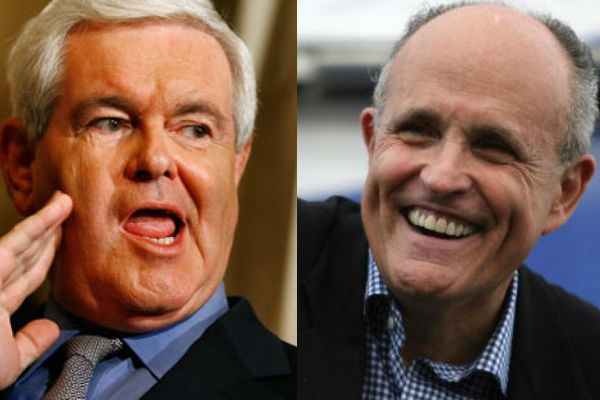 July 15, 2016 – Adding some context to their recent remarks about Muslims and Black Lives Matter respectively, new information has revealed that former Speaker Newt Gingrich and former NYC Mayor Rudy Giuliani are engaged in a tight race to the bottom, which was prompted by Donald Trump secretly offering the cabinet position of Secretary of State to whoever can best imitate his horrifically dickish qualities.

“Rudy took an early lead with his onscreen endeavor to equate BLM protestors with cop killers,” Gingrich told the press when asked about the competition. “I knew I had to act fast and decisively, so I went with the most Trumpian thing I could think of: take aside all of America's 3.5 million Muslim citizens, put them in a dark room and threaten to deport them if they sound even remotely terrorist-y.”

In response, Giuliani reminded the press that he hadn't merely intimated that protestors are guilty of murder. He had also made certain to suggest that black people are more a danger to themselves than any supposedly racist officer, wielding the narratively dickish cudgel of the scary armed black youth to score brownie points with the Donald.

“I have to admit, this is kind of fun,” said Giuliani. “It's kind of like that contest episode of Seinfeld, a show that I love cuz it's about New York and stuff. Except in this case, instead of finding out who is 'master of their own domain,' it's a contest to see who can blurt out the most masturbatory hate speech and divisive rhetoric on camera.”

When pressed, each candidate wryly hinted at their ongoing battle strategy. Gingrich says he'd posit an expansion of his surveillance tactics to include any black youth who might feel disenfranchised enough to be radicalized, as a means of overshadowing Rudy's dickheaded message. Not to be outdone, Giuliani made it clear that he hasn't forgotten about Latinos.

“I've got plenty of things in mind about the wall, I've got made-up rape statistics in my back pocket, and I can't wait to selectively ignore America's history of exploitation towards Central American nations. Oh man, Don's gonna love it.”

The revelation of the two dick-nosed retirees' rhetorical throwdown comes on the heels of Trump's selection of Indiana Governor Mike Pence as his running mate. While both competitors made clear that they prefer State, Newt lamented what a hot, dicksplashy ticket it could have been.

“Trump/Gingrich 2016 just has a nice ring to it, doesn't it? Oh, I would have had the best, most alienating slogans to sling on the campaign trail. Man, we really could have sunk the national dialogue to a new low. Plus, for all the family values voters, we would have had six wives between the two of us!”

When last visited by reporters, Chris Christie was seen muttering something about “bitches and their abortion pills” before crying into his dinner.