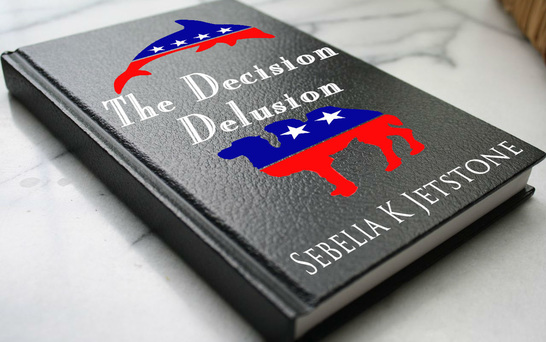 November 10, 2015 – A brand new young adult science fiction novel is already topping the New York Times bestseller chart: The Decision Delusion, a story about an absurd fictional country on Earth where every public policy and sentiment is split rigidly between two factions, and the citizens are forced against their better judgment to side with one or the other.

“The book starts with our shipwrecked young hero, Astor Grey, washing ashore on the coast of Amalgam, a nation where every political choice boils down to one of two sides,” explains author Sebelia K. Jetstone. “Grey is quickly rescued and courted by the Determinant Cabal, yet he feels that many of his personal views align instead with the Reactionist Junto, and is paralyzed by indecision, much to the chagrin of the natives.

“With the surprise success of the first book, I hope to be able to continue publishing the series,” Jetstone went on. “I'm already in final edits for the second book, The Conclusion Illusion, and soon I intend to start working on the third and most explosive installment, The Resolution Effusion.”

In addition to its commercial success, the book is being lauded for its totally unique fantasy world. While it bears superficial similarities to our reality, critics agree that few contemporary authors could have envisioned a society where every viewpoint is filtered through one of two inflexible political structures, robbing them of all conviction and nuance.

In fact, in some of the lighter sections of the narrative, Grey realizes that everyday life in the fictional country of Amalgam is also defined by having to make one of two choices, even when it's between sports teams, beverages, or fast food restaurants.

“To be honest, I'm surprised no one has tackled this notion before,” Jetstone admitted. “The story is a simple allusion to the infusion of binary politics creating the delusion of decision, an illusion that causes widespread disillusion due to a profusion of corruption and collusion. Inevitably, those suffering from exclusion come out of seclusion to imbue society with a suffusion of reason. I hope that clears up any confusion.”

Jetstone also confirmed rumors that 20th Century Fox is considering turning her first book into a feature film. While the novel and therefore the movie would be centered exclusively around hot 20-somethings, she feels that the story's unique sci-fi take on a terrifying “democratic” society gone wrong will resonate with audiences young and old.

“Even though the world of The Decision Delusion will prove unrecognizable to the layman, we're living in a golden age of science fiction where everyday audiences can appreciate a well-written cautionary tale, even one this ludicrous,” Jetstone said. “If we're lucky, and we heed the lessons of the story, we'll never have to experience a society so starkly divided, yet daring to call itself 'The Consolidated Provinces of Amalgam.'”